Selection Box in 2010 seems to have become an inordinately fractured affair.Â  Having been sidelined due to maleness a few weeks ago for International Women’s Day (solidarity, sisters), Selection Boxes 126 & 127 were separated by a an unscheduled hiatus due to spectacular bout of viciously violent vomiting and Olympic-standard diarrhoea.Â  Fear not, I will spare you the gruesome details, except to say that bizarrely this stems back nearly two years ago to a visit to Ireland when I accidentally poisoned myself on a daffodil, and somehow repeating this trick a few weeks ago despite best efforts to avoid the yellowy little buggers.Â  It takes a special type of idiot to poison yourself on a daffodil.Â  It takes a spectacular pillock to manage to repeat the trick.Â  Hello there. If you want to murder me, now you know how to do it. But please don't - I have a child and a wife and a full biscuit tin.

Well, there’s much I could have covered here, what with the suicide of Sparklehorse‘s Mark Linkous and the fatal heart attack of Big Star‘s Alex Chilton.Â  However, BCB’s musical fulcrum and all-round good egg Albert Freeman has already covered both these deaths on these pages (here for Linkous and here for Chilton) with such heartfelt erudition I think anything I would add here would be hollow by comparison.Â  However, I would be an ingrate if I didn’t say a quick thanks to Albert for accepting an impromptu invite onto the show to fill in some of the Mark Linkous-shaped gaps in my musical knowledge.

So, I guess all there is left to do is give you all them thar records that spaced out my inane ramblings on the last two shows:

This was probably the height of cool in 1977. Probably.

1.Â  Bryan Ferry – Tokyo Joe
from: In Your Mind

4.Â  Sparklehorse – Morning Hollow
from: Dreamt For Light Years In The Belly Of A Mountain 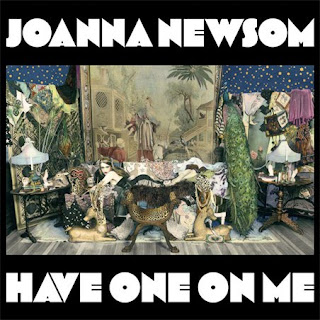 Joanna Newsom's Have One On Me: triple album from an attractive and buxom 28 year old genius who plays a harp - what's not to like?

from: Have One On Me

7.Â  Joanna Newsom – Kingfisher
from: Have One On Me

After the superb As Is Now and the spectacularly sprawling 22 Dreams, Paul Weller's remarkable renaissance looks to be continuing with the excellent new single which has more than a hint of The Walker Brothers about it. Which is always a good thing.

9.Â  Kris Drever – The Banks of the Nile
from: Mark The Hard Earth

12.Â  Paul Weller – No Tears To Cry
from: Wake Up The Nation

12.Â  The Cinematic Orchestra – To Build A Home
from: Ma Fleur

13.Â  Kath Lynn & The Playboys – I Got A Guy
from: Girls With Guitars (various artists)