A few weeks ago Sky 1 broadcast one of the most extraordinary bits of television I have ever seen.Â  For all the wrong reasons.

Fronted by cheese grater-throated annoyance June Sarpong, the channel visited a country retreat in Ireland used occasionally by the late self-styled King of Pop Michael Jackson in the hope that slick-haired scouse medium Derek Acorah could reach to the other side and speak to the former chimp guardian.

This man wouldn't lie to us, surely?

Now, it’s not for me to tell you whether to believe in other worlds, life after death or even copper bracelets for rheumatism.Â  However, Sky 1’s preposterous televisual event says far more about the nature of fan obsession for our idols than it does about either our belief structures or about Jackson’s contribution to his chosen artistic field.

I’m personally of the view that Jackson’s masterpiece is his 1979 album Off The Wall, recorded when he was just 21 years old.Â  Blending the dance grooves of disco explored with The Jackson 5 with a greater level of sophistication and less bubblegum its as good a dance record as you could ever wish to hear.Â  It even has the added bonus of sticking the two duff tracks next to each other so you can nip past them both easily enough, even on vinyl.

The follow-up,Â  Thriller, is largely known to anyone with ears (with all due deference to the deaf, obviously) being as it is the biggest selling album of all time.Â  It is largely lauded as his greatest work, but for me it cites the beginning of the end as it creates the power pop sound which would become his own personal oeuvre and one from one he would never again stray.Â  Ultimately it saw the quality of his music rapidly becoming governed by the dreaded law of diminishing returns.

Now, you don’t need me to tell you what you do and don’t like about Jackson’s output – you should already know yourself and if you don’t, well, you should grow a backbone and an opinion, by jiminy.Â  However, I give my view largely to demonstrate that whilst my reaction to the premature death of His Nibs Jackson was not an entirely dispassionate one, I’m also not someone who believes the world will never ever be the same again because a middle-aged man will never again grab his knackers and slide backwards in a hat.Â  With white socks on.Â  A man who made some really very good records indeed has passed away.Â  You’ll find this happens a lot as the years go by.

However, when an artist with quite as many adoring fans keels over suddenly with a dodgy ticker, the media seem determined to use this adulation to pick at some sort of surreal scab on the public’s consciousness.Â  And Jackson’s fans have more scabs than most, and goodness aren’t they surreal.Â  The tales of oxygen tent slumbers, face hue hubris, monkey tennis and Kublha Khanesque living arrangements are now legendary, not to mention the lurid tales and disturbing unanswered questions about his sexual appetites.

Ultimately, the myth of the man – good or bad – becomes greater than either the work or indeed the person about whom the myth has been created.Â  Actually watch any interview with Michael Jackson closely and you’ll realise the bloke himself was actually probably a bit of a dullard.Â  There’s only so much chit chat you could have with him about how much he loves the world and how beautiful everyone is before you were crying out for a conflab about the merits of playing 4-4-2 with either Hargreaves or Barry as the holding midfielder and calling each other a massive twat.Â  I can’t really see Michael – as all fans seem to refer to him with an exaggerated familiarity – being one up for a lot of jovial mud-slinging, a pint of brown booze or an over-competitive game of 5 a-side.Â  Then again, he did turn up that time at Exeter City, so you never know.

And yet, we all love a tale of Michael Jackson mentalism, and we’ve been gorging on the stories of baby dangling, loose noses, marriages to spawn of Elvis and, yes, kiddie diddling for a considerable length of time.Â  The photographs of the Neverland Ranch auction which was due to be held just a few months before his death were frankly marvellous.Â  No matter what the truth of Jackon’s life, those of us with a insatiable desire for ludicrous overblown tales of a barmstick pop star to have a good laugh at and prod fun will always look to the most famous and the most extreme examples of pantomimic pifflery for their kicks. 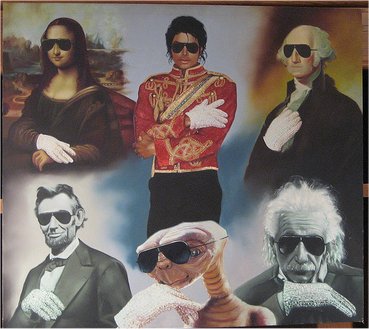 But with this, and herein lies the rub, is that when the person’s myth has become so large for us all to feast on, so too does the extremities to which those who idolise him or her will go to defend their deity.Â  They also personalise this defence for themselves.Â  Michael touched their souls, so an attack on him is a direct attack on them.Â  This in turn means that the opportunity to come close to their object of their obsession is like giving an alcoholic the key to an off licence and telling them to go for it, son.

And so it was with the three superfans that were invited to share the seance with Sky 1.Â  Michael was a superstar.Â  Michael was a genius.Â  Good grief, Michael is and was God to these people.Â  And for them, Nietzsche be damned;Â  God is not dead.Â  A heart attack can’t stop the power of a deity.Â  Michael Jackson is and was everything to these people.Â  Two of them actually made a living from pretending to be him.Â  Both of them were white men, incidentally, and for some reason this didn’t seem to be offensive.Â  Perhaps there’s a future for The Vitiligo & White Minstrel Show on Saturday evening telly.

There’s plenty to sneer, point and laugh at during this quite barmy broadcast – and rest assured I’ll be sure to poke fun before we’re done here – but the inclusion of these three fans was not just wincingly embarrassing, but deeply unethical.Â  It doesn’t take Dr Anthony Clare to surmise that the three saps who sat around that table with Derek Acorah were not entirely mentally stable.Â  Whipping up three mentally ill people into a blubbering tearful hysteria by focusing on the very person their obsessive world view is built upon is a highly questionable practice.

Or at least it is if Sky 1 categorically did not contact the spirit of Michael Jackson.Â  Which they didn’t.Â  They really didn’t.Â  Anyone not living in a fantasy world could clearly see that.Â  There’s barely an ounce of this lunacy which makes a remote bit of sense.Â  First of all there’s the suggestion that visiting a place where Michael Jackson occasionally went for a quick holiday is the perfect place to summon him up from the other world.Â  If spirits have connections to people and places, you don’t think perhaps his house might have been a more likely place?Â  And perhaps bring along a member of his family or someone who knew him rather than a pair of wazzocks dressed up to look like how he might be appear after a car crash and a woman who doesn’t know what a hairbrush is.

Still, anywhere we go we can find Michael, surely.Â  Just ask voice of reason David Guest.Â  Michael was a spiritual person, so his spirit will be in the ether.Â  And he believed in ghosts.Â  It runs all through his work, you know, the link to the paranormal.Â  Because he did Thriller.Â  Sorry, run that past me again, David.Â  Thriller is proof of Michael’s obsession with another world.Â  Apparently.Â  Not a pop song about scary films, then.

Michael Jackson as he looks in the afterlife

Lest we forget Dr Matthew Smith, the overseer of the seance who claims to be a Parapsychologist.Â  I can’t claim to know whether Dr Matthew has a real a PhD or if he bought it off a website, but what I do know is that his title of Parapsychologist is utterly meaningless and has no basis in science whatsoever.Â  His job here is to steer Derek into the bollocks blah they’ve clearly planned in rehearsal.Â  Extraordinarily, Dr Matthew tells Derek that “we’re running out of time” towards the end.Â  They have to wrap it up because their hour slot is over.Â  I’m sorry, what?Â  Correct me if I’m wrong, but aren’t we supposedly talking to the dead here?Â  Not only a dead person, but arguably the most famous dead person (not in) the world.Â  I’m not sure what’s on Sky 1 after this, but surely repeats of 24 or the new episode of Family Guy can wait whilst The Most Amazing Thing That Has Ever Happened Ever Ever Ever is taking place?Â  Commerical can breaks be damned when ghosts fancy a chat.Â  But no, we have to stick to the schedule.Â  No one is bigger than television.Â  Not even Michael Jackson.

1 thought on “Say Hello To Quincy Jones For Me: The Michael Jackson Seance”