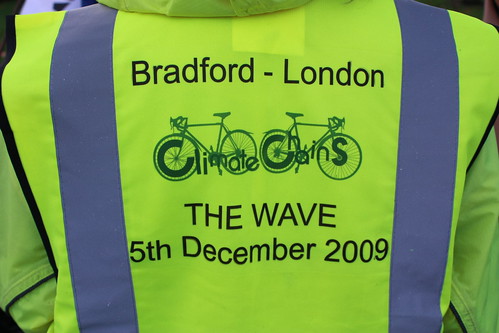 Climate Chains - The Wheels To The Wave

This week finally saw Bradford’s Climate Chains cyclists head off from Bradford (a second branch also set off from Manchester) down to London for The Wave on Saturday. I’ve been involved in the planning since we had the idea about 6 months ago. It’s been a lot of hard work, and late nights in front of a computer for me. And although I’m not cycling all the way with them, I did go with them half way to Sheffield and back on Monday. That’s the furthest I’ve ever cycled in a day, and crikey, my knees didn’t like it. I shall be heading down the London for The Wave on the train on Saturday. Fingers crossed there are enough of us to effect a change, to halt the change. You can monitor progress of the cyclists on their blog, and on Twitter:

Here’s what I played last night, finishing on a tune for the Climate Chains cyclists: