Ellie Greenwich is not a name which will immediately fall from the mouth of most people when asked to list the World’s greatest songwriters, and yet she has left an indelible mark upon pop music.

Not only is she credited with discovering Neil Diamond – for whom she also sang backing vocals, but her writing partnership with Jeff Barry (whom she would marry and later divorce) produced some of the most enduring moments of pop genius in tandem with the now chokey-dwelling producing genius Phil Spector.

Tracks written by Greenwich with Barry and /or Spector include Leader of the Pack for the Shangri-Las, Then He Kissed Me and Da Doo Ron Ron for The Crystals, Be My Baby for The Ronettes and perhaps most tellingly River Deep, Mountain High for Ike & Tina Turner. 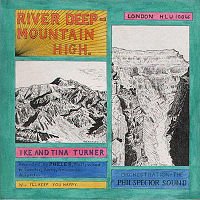 Such was Spector’s frustration at River Deep, Mountain High’s failure to chart in the US – where it peaked at No 88 – that it effectively ended the Wall of Sound label, and Spector stopped working for a considerable period.

To Britain’s eternal credit, the track did much better on this side of the Atlantic, reaching No. 3.

River Deep, Mountain High features at No 33 on Rolling Stone magazine’s list of the 500 Greatest Songs of All Time. The Greenwich-Barry writing partnership features more entries in that list than any other writer.

Ellie Greenwich died of a heart attack on 26 August 2009 after being admitted to St. Luke’s Roosevelt Hospital, New York City for treatment for pneumonia.