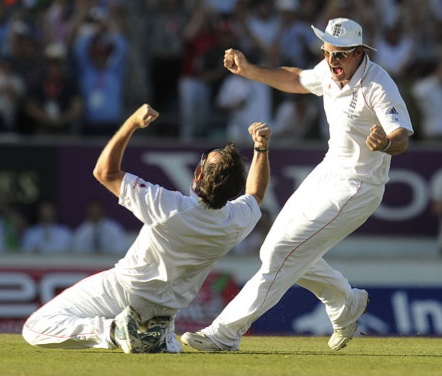 Strauss and Swann as England won the Ashes, 23rd August

I know, I know, who needs another look back at the musical year that will forever be remembered as 2009? Well, I for one need to jot down a few notes about the year’s music, if only for myself to look back on in my dotage. If anybody else is interested by what I write here too, then that’s a bonus. I’ll try and make that the only clichÃ©d sentence though..!

I’ll get to the music of 2009 in a moment, but the most enduring image of 2009 was the look of sheer unbridled joy on the face of Andrew Strauss as Graeme Swann took the final Australian wicket as England won back The Ashes at The Oval in August. He just looked so happy. It must have been wonderful to be Andrew Strauss’s mum or dad on Christmas morning watching him open his presents. I have my own reasons for fondly remembering 23rd August too, as I listened to TMS while walking soaking wet in Dent with Sally at the end of a weekend away.

Now…the music. One caveat on everything that follows – it must be stressed that there is a lot of music I read about but didn’t actually hear in 2009, so my judgement is biased by what I’ve heard. I suggest listening to the following tune while reading on; all will become clear:

My favourite lyric of the year came from Wild Beasts, in The Fun Powder Plot:
“This is a booty call, my boot, my boot, your asshole”

My sonic palette evolved in 2009 as I got more into beats and bleeps, and in particular Warp Records, celebrating their 20th anniversary. I probably played more Warp tunes in my show than any other label in 2009, and there were several other notable Warp days for me in 2009. For instance, the Warp20 (Sheffield) day, Battles, Flying Lotus and Nice Nice in Manchester, or the Warp20 (Minutes) night Phil, Laura and I did on BCB.

My favourite single of 2009 was RosenrÃ¸d by DiskJokke. I’m not suggesting it was the best single of 2009, but it certainly represents my growing interest in electronic music, and contains my favourite bit in any tune of 2009 – the passage around the 3:43 mark. Thanks to one of 2009’s online developments, Soundcloud, you are probably listening to it now.

I haven’t got a favourite LP of 2009. There have been plenty of contenders, but to my ears, each of them has a lull, so I can’t put any one LP on a personal pedestal. It was also interesting, when looking at various 2009 polls, to notice the great divergence in opinion there was in the music press. Grizzly Bear, The Phantom Band, and The Horrors all topped polls, but none of those were even included in every poll, nevermind being near the top. In terms of LPs, for me 2009 was the year of the re-issue, as there were welcome re-issues by Big Star, Neil Young, Kraftwerk, The Beatles and Spiritualized.

In terms of live music, well Animal Collective towards the start of the year were fantastic; The ATP Festival in May was, as ever, full of multiple highlights; and towards the end of the year, seeing Daniel Johnston is something I will never forget, with or without the aid of the memory jogger that is this here blog.

Daniel Johnston in Leeds in November 2009

If I were to make a playlist to become a double-CD compilation, called Now That’s What Albert Calls Music: 2009, it would look like this:

I contemplated Spotify playlists for the above, but as half the songs aren’t on Spotify it didn’t seem worth bothering with.

Finally, a mention must go to those musicians who passed away in 2009. I’m afraid I can’t remember them all, but here are three: Ellie Greenwich, Vic Cheshnutt and Michael Jackson.