I have to confess it gives me an extra thrill to stand and watch Bingley Music Live every year. I spent the first 18 years of my life living in and around Bingley and so to come back and stand in Myrtle Park and watch the event grow into a what is becoming a full blown music festival is very exciting, and a little bit surreal.

It’s a far cry to see the likes of Doves and The Editors taking to the stage from the event’s inception around a decade and a half ago as Music At Myrtle. Back then the acts taking to the stage were the likes of A Tribute To The Blues Brothers followed by a headline acts such as Mike Pender’s Searchers, Showaddywaddy and, on one occasion, Hot Chocolate without Errol Brown. You name another member of Hot Chocolate – I bet you can’t. The lead singer, for what it’s worth, looked a bit like David Gower with a mullet.

There was a brief period of time when 70s acts of yesteryear were replaced by the occasional appearance of a newly-crowned hasbeens – thus STEPS made an appearance one year.

However, in recent years the organisers have suceeded in polishing a turd. Admittedly it was a rather fun turd, but a turd is really what it was. Under the new (and frankly poor) name of Bingley Music Live, the event has sought to grow into something more than a free family day out with a trip down memory lane thrown in.

It’s not free anymore for starters. Well, not all of it. Friday’s warm-up day featuring The Undertones stuck to the old format of free entry and nostalgia, but for the first time this year entry on Saturday and Sunday required punters to shell out. Unless you get a nice free pass with BCB, of course. 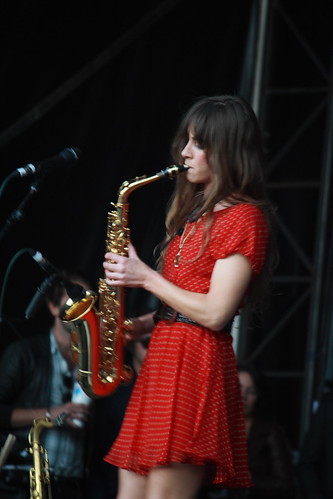 Abi Harding from The Zutons on stage at BML

It feels a little like this is the year that the festival is really beginning to take itself seriously. With all due deference to Happy Mondays and Echo & The Bunnymen – who both performed splendid sets last year -there was still a sense that the headline acts were chosen from a sense of nostalgia.

This year, however, the majority of the acts are artists whose success is not on the wain.

Though Doves have been knocking around for nearly 25 years, when they wrote and performed as dance act Sub Sub, the band are still shifting bucketloads of records – with current album Kingdom of Rust reaching number 2 upon its release in April.

The question really now is where can Bingley Music Live go next? In the space of three years the festival has changed from a local event to something which people are prepared to travel to see – BCB’s coverage on Saturday discovered a number of punters travelling a good distance to attend. However, the park is not sufficient in size to cater for a full-scale three day mini Glastonbury-style festival. There’s an additional field at the rear of the stage, but this is not large enough to take more than a couple of hundred tents, and then you have to consider toilet facilities for that many revellers. It’s frankly not feasible.

The fact that the organisers are now charging for two days means that the bigger name acts can be attracted to play, but the balance must also be found between making the event something people are prepared to spend brass on whilst still maintaining the early slots as a platform for local acts as has been the case over the past few years.

Still, I for one reckon next year should be great…