Listen to BCB LIVE – 106.6 FM in West Yorkshire, and www.bcbradio.co.uk/bcb.m3u everywhere else..

Whole Lotta Love inna dance-rock stylee anyone? anyone at all?

AND Stairway To Heaven! No? a step too far?Â ….come back here, now!

More playlists and pictures at www.rob-walsh.co.uk 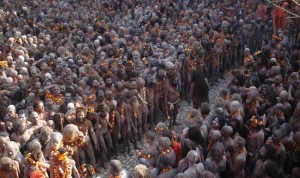 Scores more astonishing photos received from our friend Irene Young, at the Kumbh Mela in India.

Irene would like to get a book of the photos published, to help fund the school at the Buddhist monastery in Myanmar sheÂ teaches at – if you have any suggestions that may help her I am happy to pass them on.

Here’s what she has to say about this one:

‘It was the main bathing day at the Kumbh Mela.Â Thousands of Naga sadhus took the bath in the early morning, and we managed to stayÂ behind them and get to the bathing ghats.Â No one isÂ allowed to take photos at these ceremonies, but I managed to get the crowd shots by sneaking into the temple area and reaching a top floor. To stay down with them could have meant violence if they saw cameras, we had to be so careful.’

In memory of Ian Lindsay