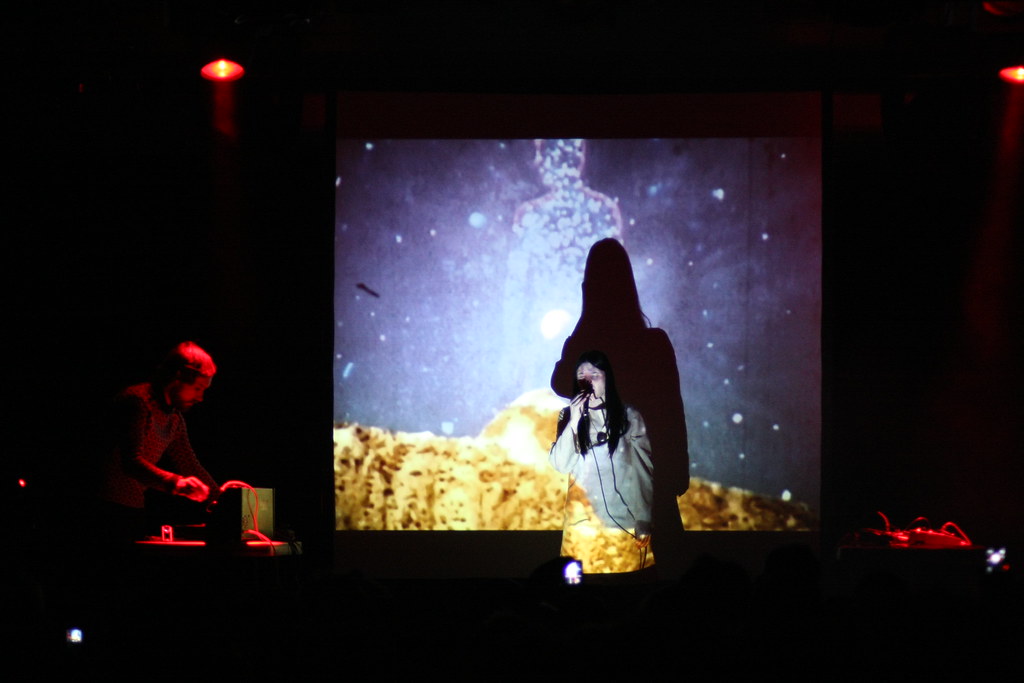 Another of the ATP archetypes is the “well respected American college rock band” , and this position is filled by Built To Spill on the main stage who are one of those bands who more people have heard of then have actually heard. Unpretentious to the point of dullness, they give us a set that could be accurately described as “workmanlike”, both in the sense of the done-by-numbers distorted strumming with the “not that arsed” Jay Mascis vocals on the top, and by the fact that they look like they’ve come to fix your water mains. 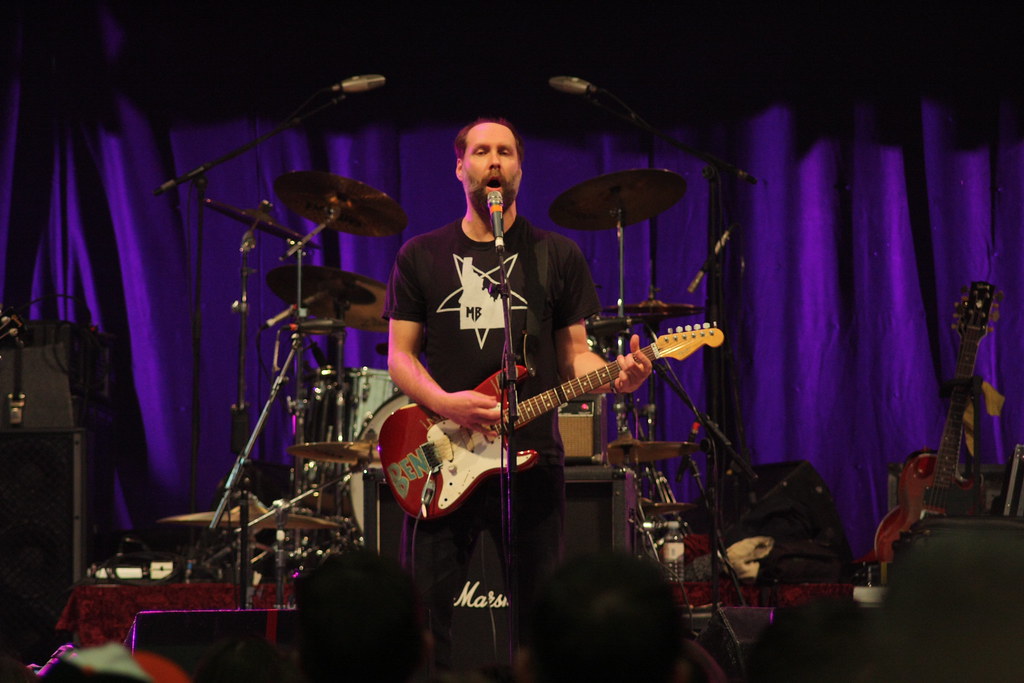 It is at this point that I spot the first example of what we will henceforth refer to as “a bad thingâ€ in the shape of young lads punching the air like they do at U2 concerts. This perturbs me so much, that me and Albert go in search of the scuzzy electro thrills of Cold Cave.

The darkened stage onto which the band stumble doesn’t get any lighter [hence no photo – Ed] as Wesley and associates – participators in more side projects than Jack White – pump out some fine, if rather anonymous, early 80’s Human League/ New Orderish electro pop. It is at this point that I spot the first example of what will henceforth be referred to as “a good thing” – people dancing. This cheers me rather and we amble down the front to see tonight’s top turn, the reformed Iggy and The Stooges.

Only the most ardent Take That fan could argue that Iggy and the boys have not made some of the truly great records of the rock era, and no band, other than possibly the Sex Pistols, have made so little actual money out of their epoch defining noise. So it’s hard to begrudge The Stooges making a few bob for their old age by knocking out the hits, especially when their records were originally about as commercially successful as a Nick Griffin all nude calendar.

They bound (well, Iggy bounds; the rest of them kind of trudge, as befits ex-drug dustbins unexpectedly finding themselves in their mid sixties) onto the stage, Iggy looking, as he always has done, like a shaved ferret with an urgent need for the lavatory. They then proceed to do exactly what you’d expect them to do. 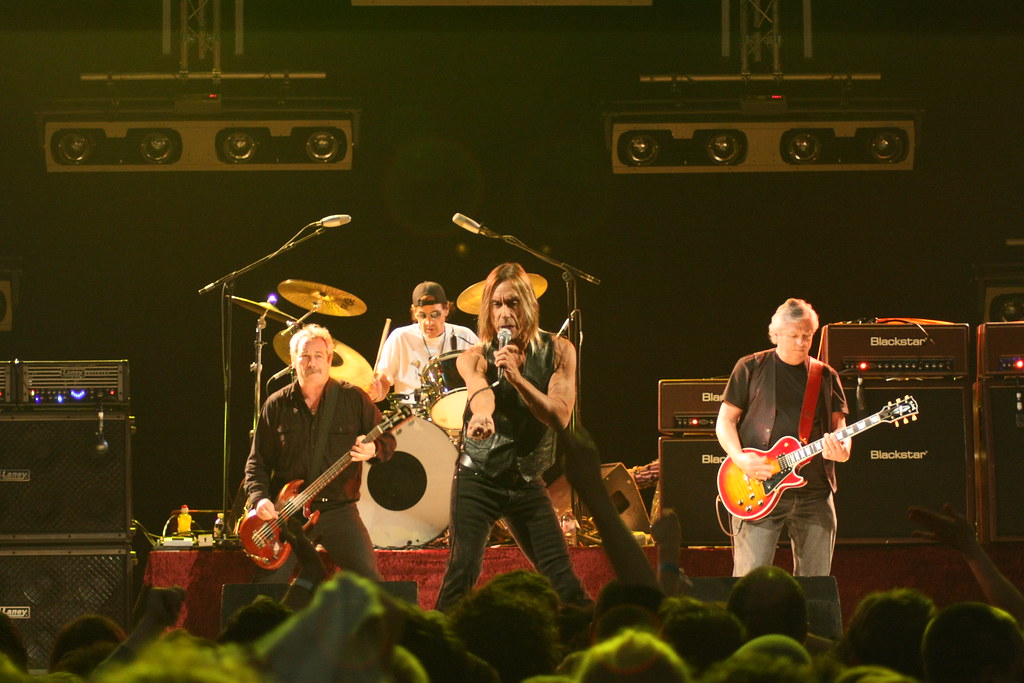 Iggy and the Stooges - showbiz

Iggy takes his top off after the third song, and dodges plastic beer glasses thrown by over enthusiastic young lads (them again) in the name of “rawk”. No one looks at the band, which is just as well, as rather than the elegantly emaciated , blank eyed, warriors of yore , they look to a man like the Barron Knights slaying the crowds in a dank working men’s club in Mablethorpe.
[You may, at this stage, find all this Judging People By Their Appearances a trifle shallow and you may be right, but I offer you this â€“ a) nobody in their right mind would be promoting The Ig to his sainted throne of rock ‘n’ roll if he looked like a 67 year old retired pipe fitter from Manningham, and b) I can do this because I am proper fit and well gorge myself – really, ask anyone, actually just ask me]

Iggy calls us all “motherfuckers” a lot (as expected), invites people up to the stage (as expected) and generally gives the people what they want. It’s rather like watching a seasoned showbiz professional, working the crowd, knowing exactly what to do and when, because he’s done it all a thousand times before. The cumulative effect is rather like watching a tribute band who’ve studied all the Stooges moves in the finest detail in order to replicate them on stage, and I end up heartily entertained if a little under whelmed.

Again, in an example of “a bad thing”, when the pleasures of being twatted on the back of the head by badly aimed plastic pint pots (usually empty, there’s a recession on you know) begin to fade, I take refuge near the side of the stage for the rest of the set, and three unconnected strangers come up to me, punch me good-naturedly in the arm and holler “RawkandRoooollll” at me. Covered in piss weak lager dregs and with a slightly sore arm I go off in search of further thrills.

And I find them. In what is possibly the strangest piece of scheduling since Cradle of Filth were the opening act for Sooty’s Magic Christmas at the Bradford Alhambra in ’88, the Centre Stage (which is situated bizarrely to the right of the main stage) features Toumani DiabatÃ© and band, straight after Iggy’s Stooges sing-along road show has ceased. 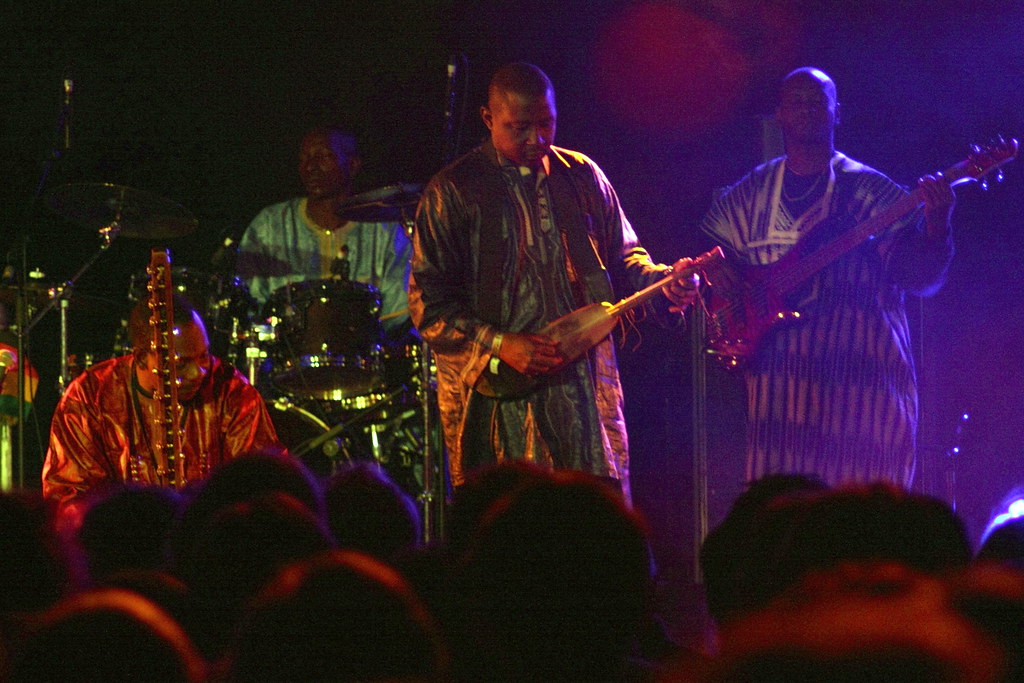 Diabate is from Mali, one of three African acts welcomely added to the bill in the kind of departure from the expected that lifts ATP above other festivals. His speciality is an instrument known as a kora which basically is a kind of harp that looks like a big upside-down Chup a Chup lolly with strings on it, and sounds, when Touimani is playing it anyway, like a million angels crying with joy.

Both band and solo pieces are played and all through Toumani sits cross legged at the front of the stage nodding and smiling and launching into incredibly complicated and heartstoppingly beautiful flurries of notes. And people dance, remember this is “a good thingâ€. 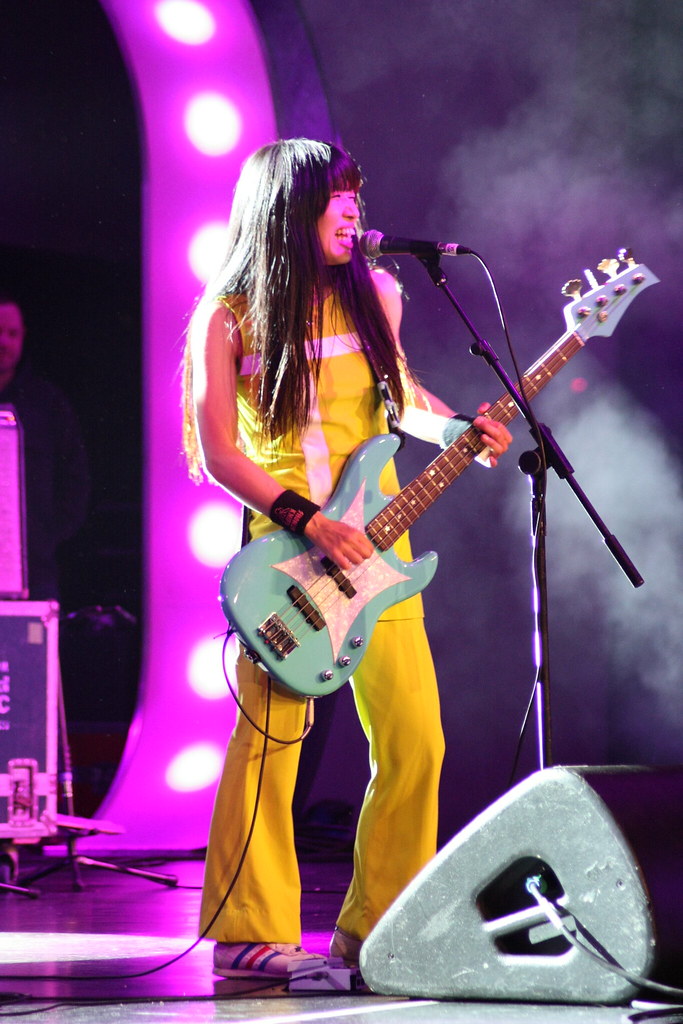 Shonen Knife - not dark, or moody.

I return at 1am to see Liars who do their spiky stop start shouty things with predictable aplomb, but I do not notice because I am smiling like a 4 year old on Christmas morning and genuinely considering getting a kora and learning to play it …..and so to bed. 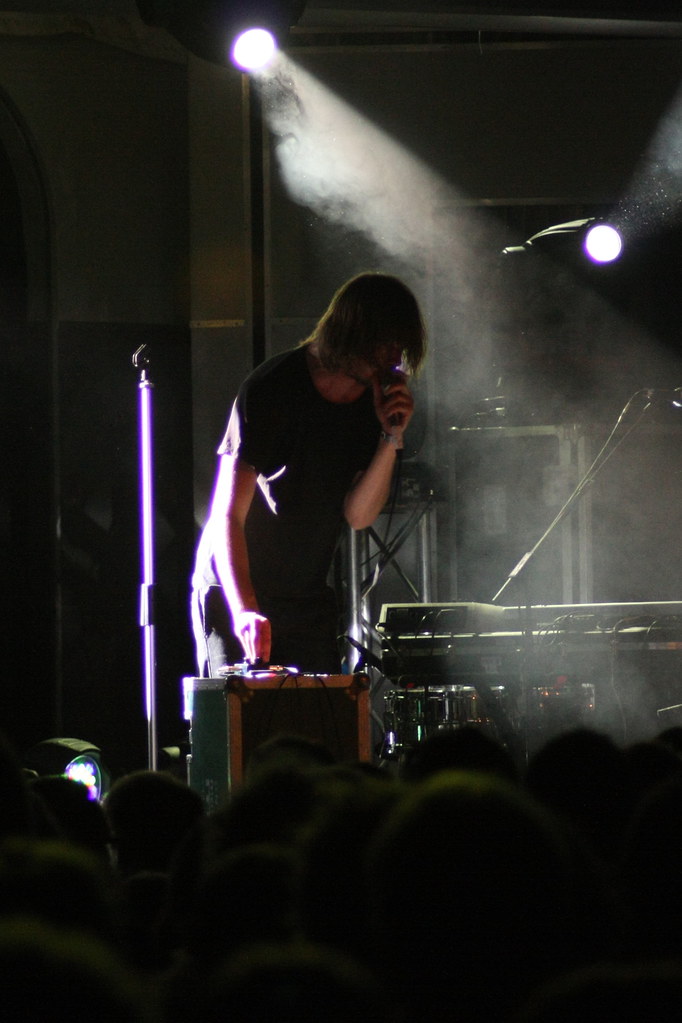