Saturday begins with two hours of 70’s kids cartoon Hong Kong Phooey on the excellent ATP TV channel provided for the weekend. Refreshed by the antics of the titular kung fu practicing canine, we venture forth into the unknown. [I ventured forth a little earlier than the others and caught Hello Saferide, in Reds. I was rather impressed by her Swedish knack of finding a good tune, and sentimental lyrics. Ed] 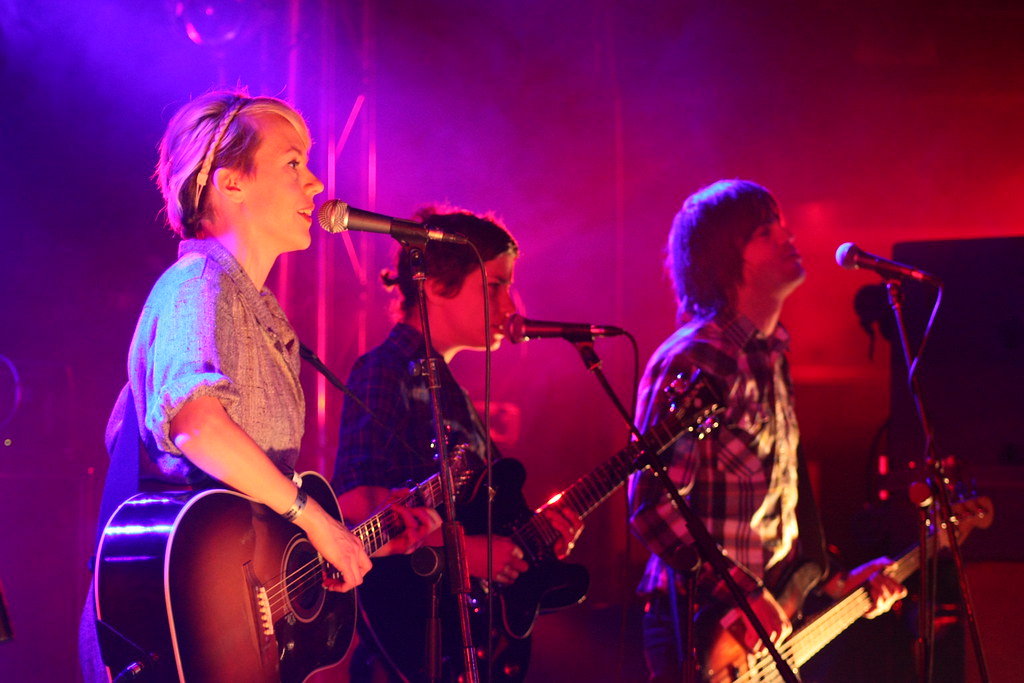 Between the four of us (me, Albert, Simon and Jim) we can conjure up little previous knowledge of Boredoms despite the fact that they appear to have been going since about 1942 and have released about half a million records. The notes about them printed in the frankly beautiful programmes (coming with 4 different covers featuring Matt Groening penned caricatures of Iggy, Joanna Newsome, Daniel Johnston and someone we didn’t recognise [either She & Him or Lightning Dust, the jury is still out â€“ ed]) weren’t much help either. In this we simply read a breathless treatise about Boredoms being Japanese, having a penchant for using lots of drummers, and being a bit ace.

We also, at this point, contrived to split up and took varying positions in the Centre Stage, Albert down the front with his camera , me at the back the better to survey the crowd’s response and Jim and Simon probably at the bar (sensible lads). What happened next has left me rummaging around in the superlative jar looking for suitable descriptive words between seeing it and writing this. I’ll describe the scene:

Boredoms are here to recreate a piece called “Boadrum”. Not only do we not know what this is, but Albert and I spend a significant portion of Saturday morning arguing about how to pronounce it [thatâ€™s very polite Phil; basically, I had mis-read it as â€œBoardrumâ€, and was therefore mispronouncing it – Ed] . On the empty stage there are seven drum kits, arranged in a loose semi circle across the front. At the back is a towering sculpture-like edifice with seven guitar necks [they appreared to be Fenders from a distance – Ed] protruding from it and beside this a tower of a further seven of what look like lap steel guitars. 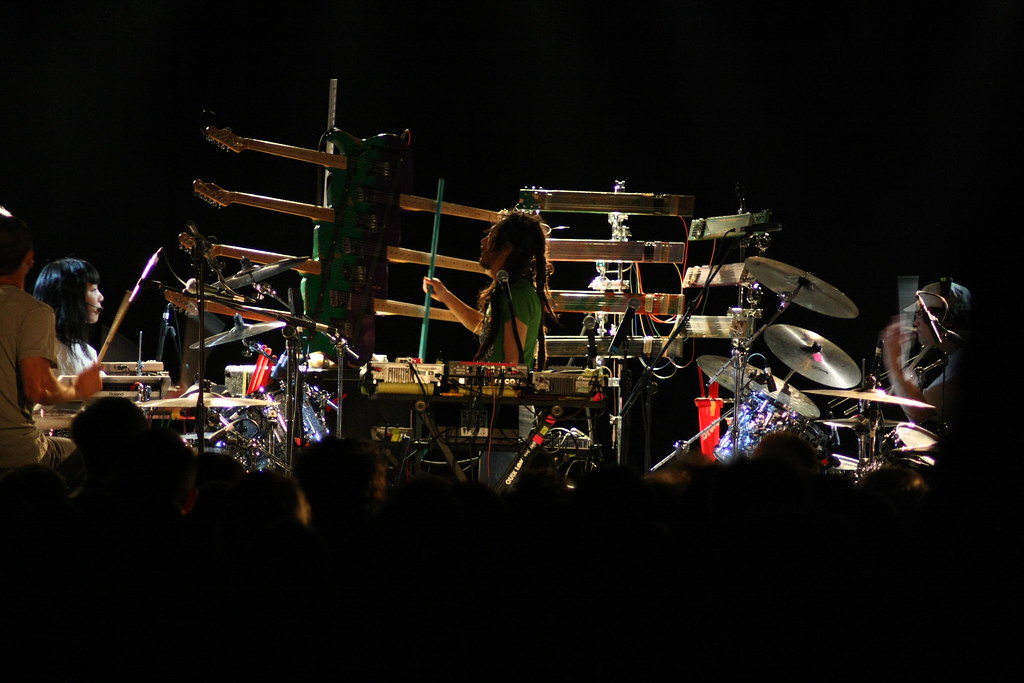 Boredoms and their musical sculpture

Boredoms take to the stage and apart from EYE, who appears to be the leader, sit down on their drum stools and begin a scything wave of cymbal noise which engulfs Centre STage. EYE stands in the middle and growls and yelps in Japanese. This goes on for ages until they all stop simultaneously and then with a thunderous single “WHOP!”, six drummers start playing â€“ sometimes in unison, and sometimes with subtly different rhythms, the patterns snaking together to form a sinuous rattling beat that changes and metamorphoses over the course of the next hour and quarter, but doesn’t stop.

EYE then takes a large fluorescent stick and begins hitting the guitar neck sculpture with it to produce clanging drones, over which he shouts his tits off [it becomes apparent at this point that each guitar neck has had its strings tuned in such a way that the necks can be hit sequentially to produce melodies â€“ Ed].

While all this is going on, a seventh drum sound is heard from the back of the venue. When we wheel round as one, we see a man doing what can only be described as hammering the bollocks out of a drum kit while being borne aloft across the crowd at head height until he reaches the stage, at which point he leaps onto the stage and sits at the one previously vacant drum stool. The drum patterns continue to morph and change so that at various points the rhythm resembles dancehall, dub, hip hop, death metal and countless other genres.

All of this has the effect of making me text everyone I know describing the scene – and they all text me back accusing me of being on drugs. Albert texts me from the front with profanity laced incoherence about how good they are. I cannot understand a single word of his text but I know exactly what he means. Around me, some people are dancing (a good thing), some people are crying (a good thing) and some people standing transfixed in open-mouthed amazement (a very good thing). We have seen something special (Pseud’s corner, here I come)

I stagger dazed and happy out in the Pavillion Stage area where Danielson appear to be a Country and Western band dressed as nurses. They do not engage me so I break a previous vow and decide to find a pub to see if I can find out whether my beloved Leeds United are beating Bristol Rovers, a victory which will see them promoted to the Championship on the third time of asking. I cannot find anywhere showing the game and so seat myself in an Irish pub which has Sky Sports News on with the sound down. [Phil misses Deerhunter in doing so, which is a shame, as they too were excellent – Ed] 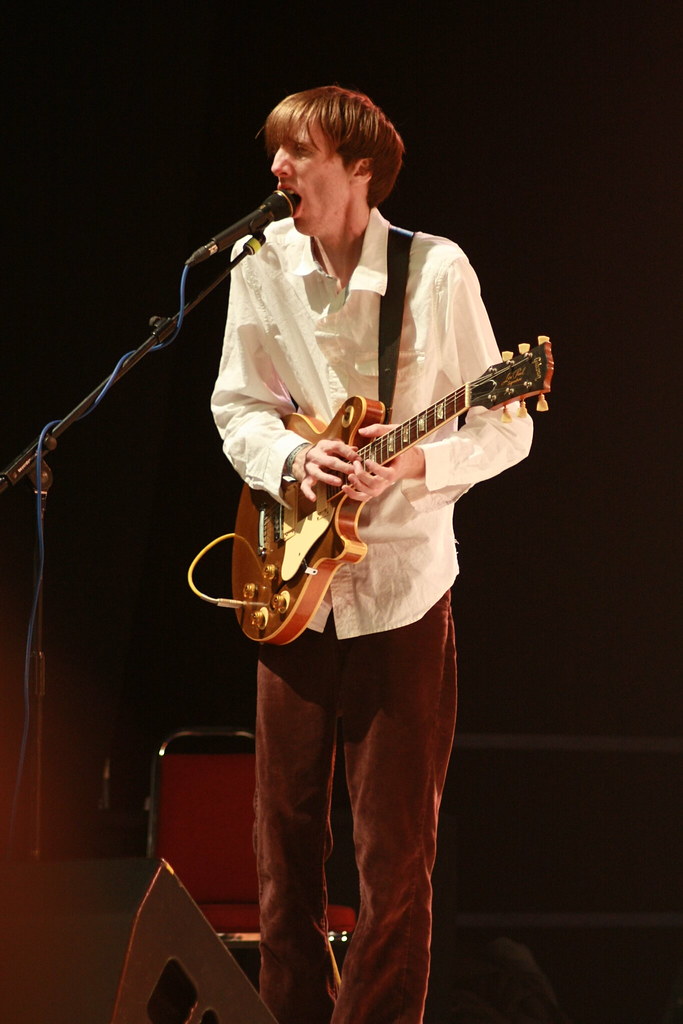 Deerhunter - 2nd year in a row on Pavillion Stage

Temporarily suspending my ideological aversion to Sky TV and feeling a bit disloyal to Gabby Logan, I purchase a pint and for the next hour try and read Charlie Nicholas’s lips. This feat is made all the more difficult by him only appearing to posses one.

I am joined for moral support by Jim and Simon and we discuss the merits of Boredoms and the future of Manchester City, whilst all the while I am glancing nervously at the scores and adopting the default Leeds United fan’s position of hoping for the best while simultaneously fearing the worst. Full time comes after what seems like about 20 hours and 10 man Leeds have hung on for a 2-1 victory that sees them promoted. Simon buys me a pint to celebrate (my fourth of the afternoon) and I attempt to show my happiness by trying to hug people with results that can best be described as mixed.

Bathed in the glory of a righteous victory, I leave the lads in the pub and totter unsteadily back to Centre Stage to see Kinshasa’s Konono No.1 who specialise in something called Bazombo trance music. I am sold on the name alone. 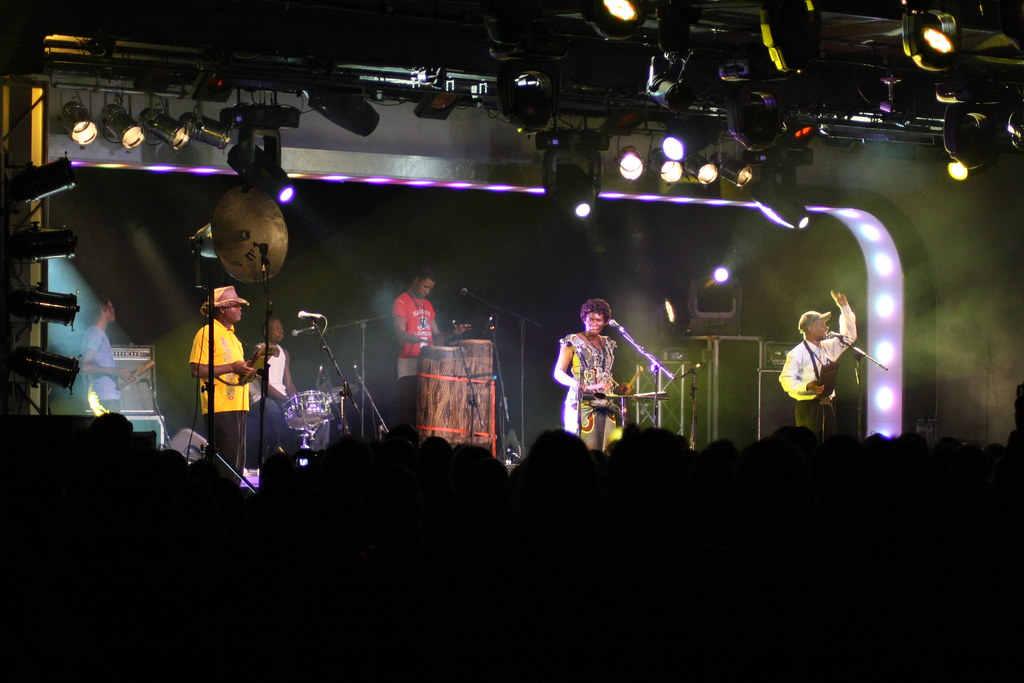 Konono No.1 and their thumb pianos

Like all music from the Congo their tunes are fiercely danceable and the crowd are already a mass of flailing limbs by the time I get there (this remember, is a Good Thing). Konono No.1 proceed to blast through extended selections from their four LP’s on Crammed Discs with an effortless, fluid charm. They also repeatedly exhibit one of my favourite characteristics of live African music by grinning broadly all the way through their set and looking as if the are having as good a time as they are giving us. [thatâ€™s interesting, as I thought one of them appeared to be sulking throughout – Ed]

I decide to give The Residents a miss and apparently miss one of the highlights of the weekend [yep, you’re not wrong, they were bonkers and I was captivated by them! â€“ Ed] so that I can watch a Canadian sitcom called “Trailer Park Boys ” on Matt Groeningâ€™s TV channel [for there are two channels, one programmed by ATP, and one by Matt – Ed], and return to Centre Stage to see Ponytail, who do not make much of an impact on my due to my being distracted by a young couple next to me snogging with such unrestrained abandon that I fear for their fillings. I muse that this is a nice thing but still move a further three feet away, lest I be caught in the tidal wave of saliva that threatens to emanate from them at any second. 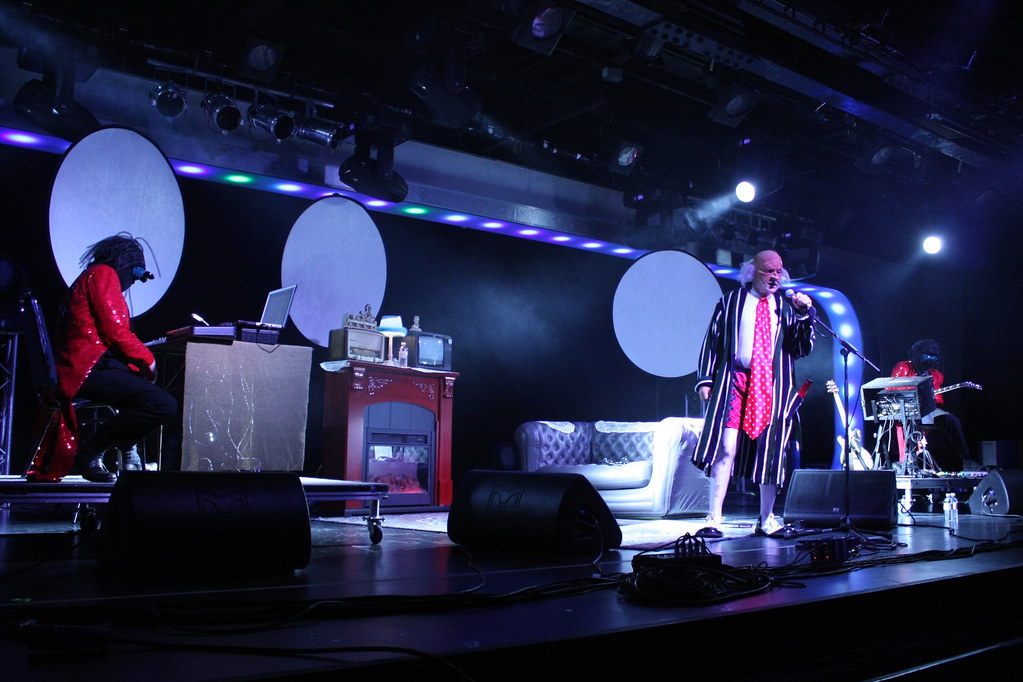 At home with The Residents

In doing so, I become further distracted by ATP’s massage people. These are a group of black clad young men and women who stalk the site with folding chairs, offering to give the ATP punters massages. My eye is caught by a particularly Amazonian looking young woman who appears to be trying to pull her client’s head off his shoulders whilst simultaneously tickling the back of his neck. I am transfixed by this, anticipating a gory decapitation as the only reasonable conclusion, when she suddenly desists and he stands up smiling and gives her a ten pound note. When he has gone, apparently no worse for his experience , she high fives her colleagues and this disturbs me, so I move again.

I am once again settling down to watch the plucky Marylanders giving their all, when a man walks past me wearing a jacket, jumper and shirt but no trousers or pants. I take this as a cue to go for a lie down. 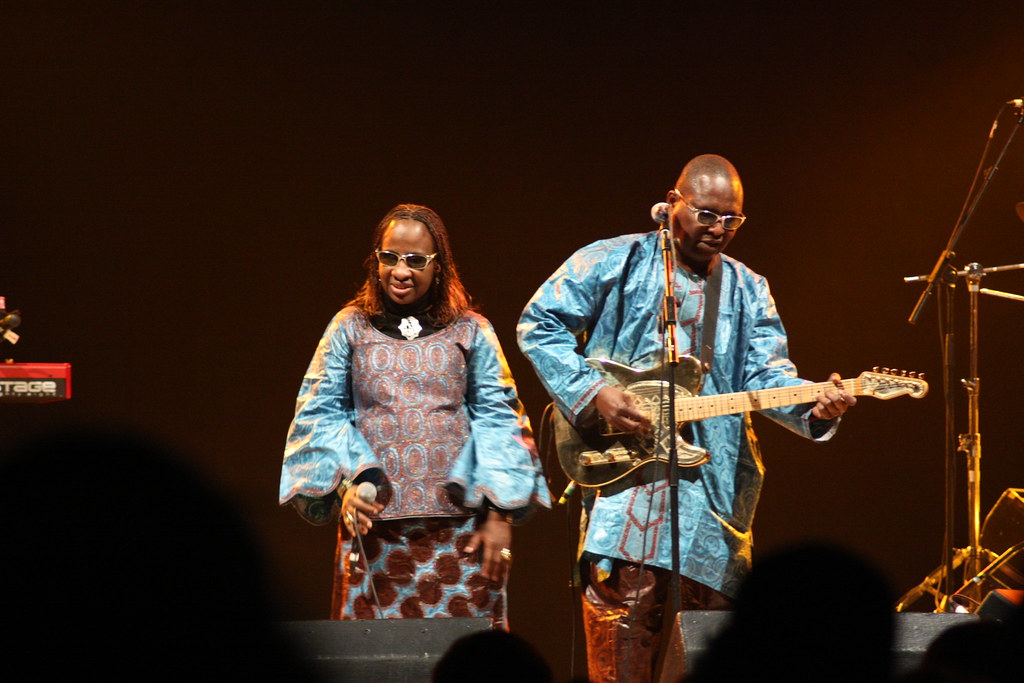 The aforementioned lie down actually transforms into an alcohol induced coma and I miss yet more bands including the excellent Amidou and Mariam but shake myself in time to see my long time hero John Dwyer’s latest band Thee Oh Sees who come on like a mixture of Lightning Bolt and Herman’s Hermits. Their noisy tendencies constantly threaten to overwhelm their tunefulness but never quite do so, thus producing a thrillingly tense performance that appears to collapse at any moment, but never does.

This makes me think that John Dwyer is a very clever man and the spidery tattoos of what looks like a map of the London sewage system that decorate his arm makes me think he may be quite hard as well. 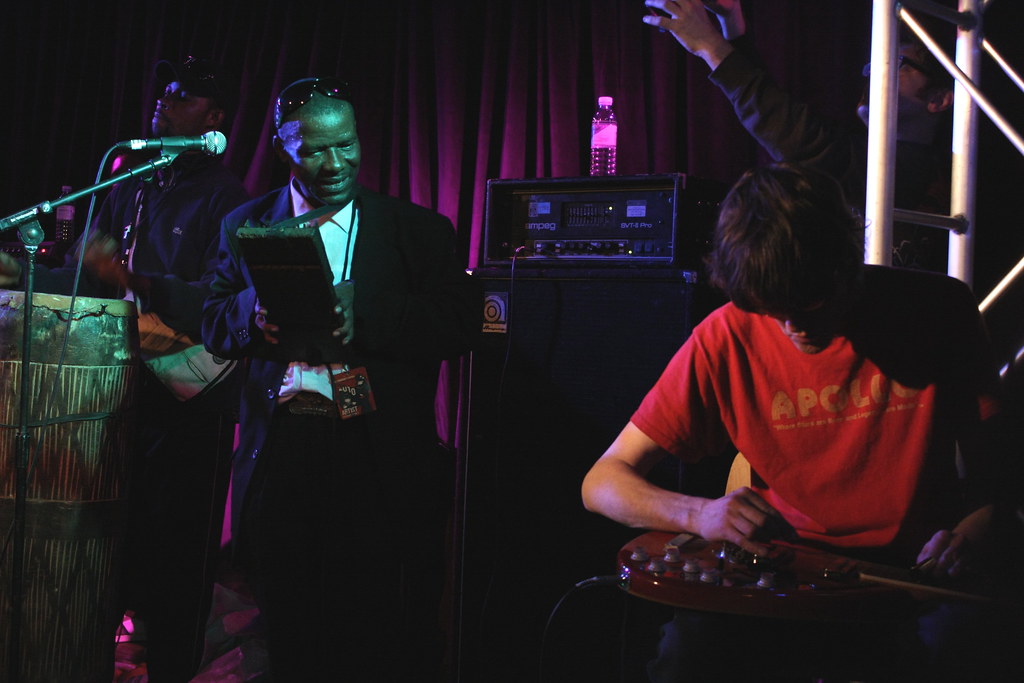 Suprise jam between Boredoms' drummers, Konono No.1 and J Spaceman

On leaving I find Albert, Simon and Jim at the head of a mysterious queue which turns out to be a for a special “first 500 people only” jam session between Boredomsâ€™ drummers, Konono No.1 and J Spaceman. Excited though they are, I find the words “jam” and “session” to be as about appealing in conjunction as the words “bubonic” and “plague” so I give it a miss and spend the latter moments of Saturday watching the Football League show, feeling patronisingly magnanimous about the teams below us that have to suffer the hell of the League One play offs and watching Max Gradel trying to kill the referee. [this also results in Phil missing Panda Bear, although to be honest I think even if Leeds had lost 5-0 he would still have preferred to stay in, as the words â€œAnimalâ€ and â€œCollectveâ€ have similar effects on him as the afformentioned â€œjamâ€ and â€œsessionâ€. â€“ Ed] 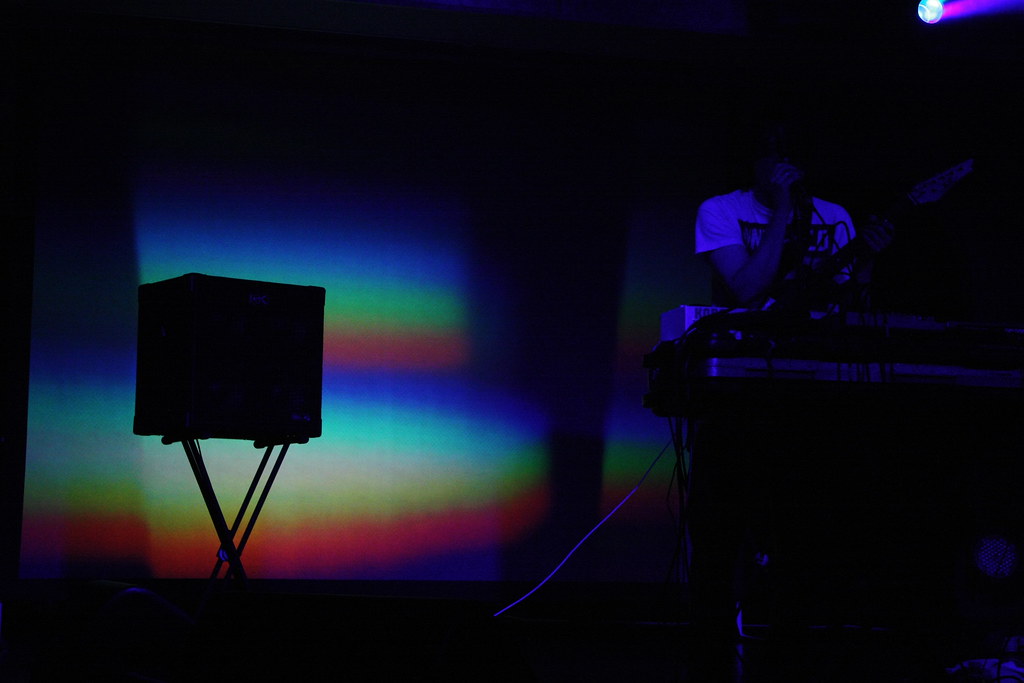