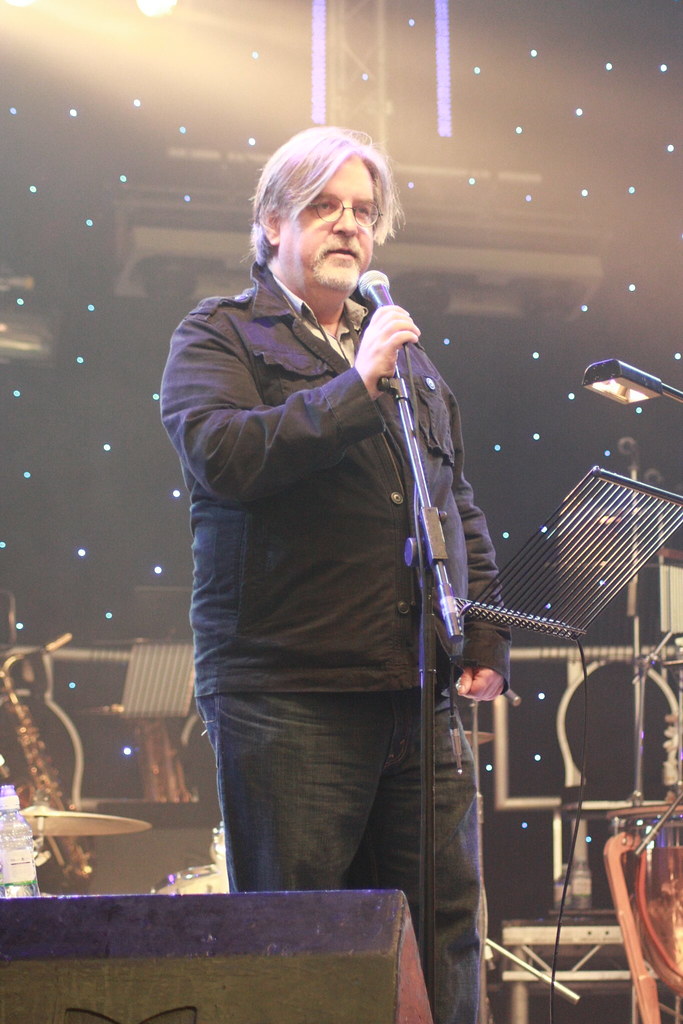 Sunday dawns and Jim becomes my hero twice in ten minutes by making me a fried egg sandwich and telling me he once saw Spike Milligan in a pub in Manchester. Simon rather coyly reveals his affection for Spear of Destiny and I resolve to play the excellent “Do You Believe in the Westworld” on the radio for him, only to forget later and feel like a dick for doing so.

We race to the Centre Stage to see Boredoms again, just to reassure ourselves that we weren’t victim to some kind of mass hallucination yesterday and they are once again, amazing. We then decamp to Reds, the smallest of the Butlins venues to see Viv Albertine’s Limerice who are excellent. 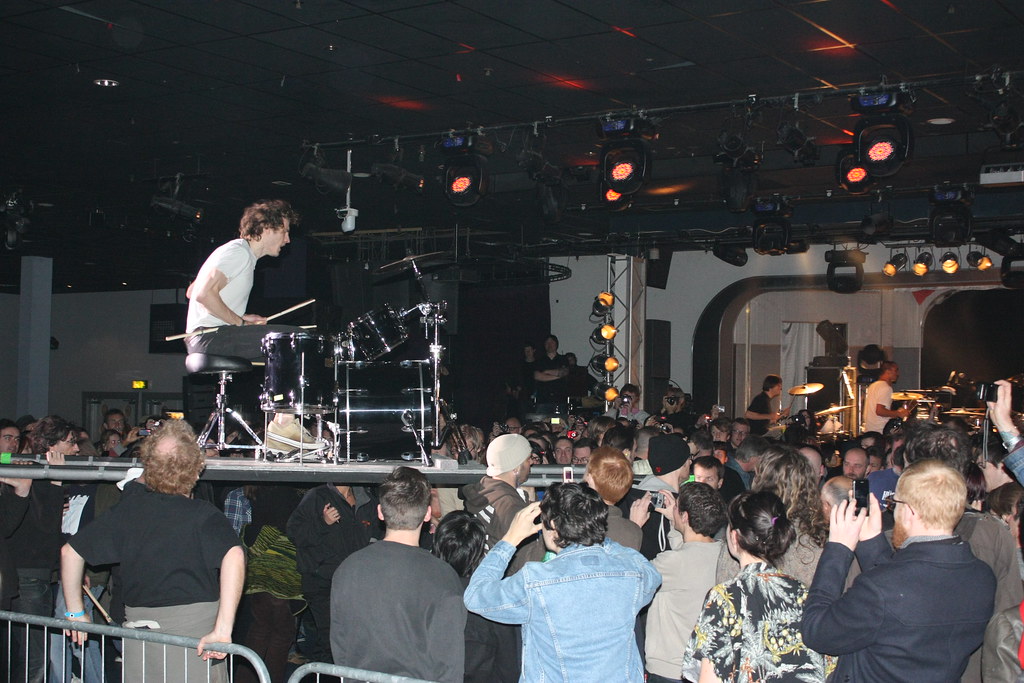 Boredoms on Sunday. Same drummer-on-shoulders stunt as Saturday, but it was another of their 7 drummers who got to have a go today

Knowledgeable readers will know Viv Albertine from her tenure in punk band The Slits and possibly also for the fact that she was in the legendary punk band that never was The Flowers Of Romance with Sid Vicious. After years of domesticated musical silence she has recently released a stunning EP called Flesh on Thurston Mooreâ€™s Ecstatic Peace label and plays all the songs from it today along with a bunch of as yet unreleased material which is, if anything, better than the EP. 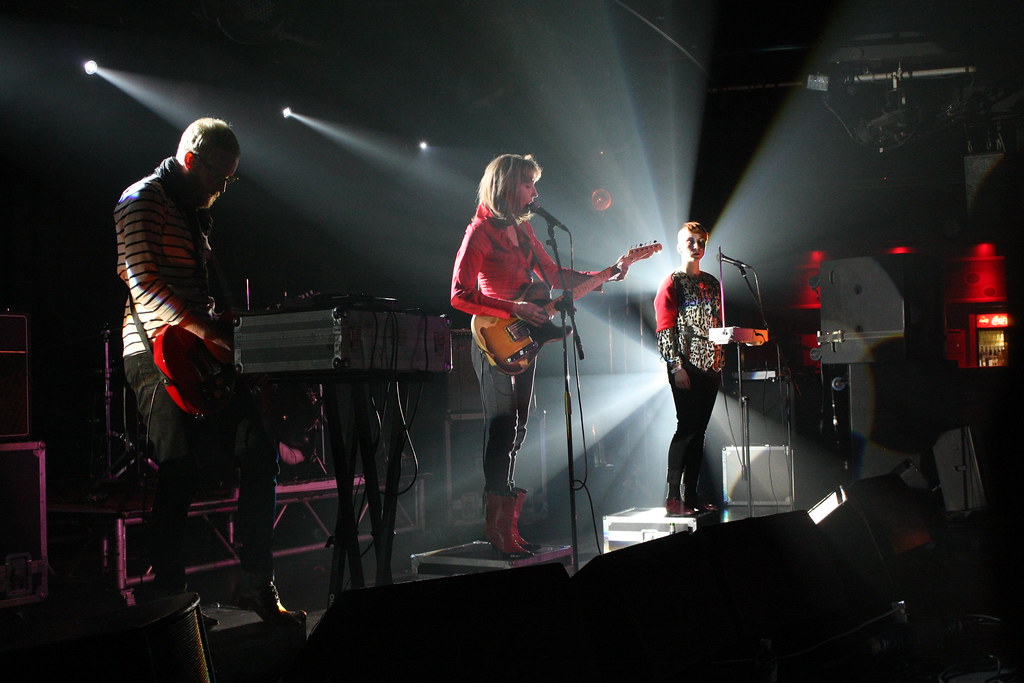 Viv Albertine had her band stand on flight cases throughout her set, just so that we could see her red boots.

She responds to requests for Slits songs by saying “I can’t remember any of them” which makes me love her a bit more. Viv also veers from the accepted alt rock path by talking to us lengthily in between tunes. She is painfully honest and tells us about how her husband has kicked her out for “picking up a guitar again after 17 years”, how all the Flowers of Romance were enthralled by Johnny Thunders, how she’s had loads of sex and finds it all a bit boring now, and how she thinks that couples are creepy, which she follows with a song of the same name.

After Viv Simon, Jim and I go to the pub to ensure that Manchester United don’t win the title and watch Chelsea whack eight past a hapless Wigan defence before going off to the Pavillion Stage to see Daniel Johnston. 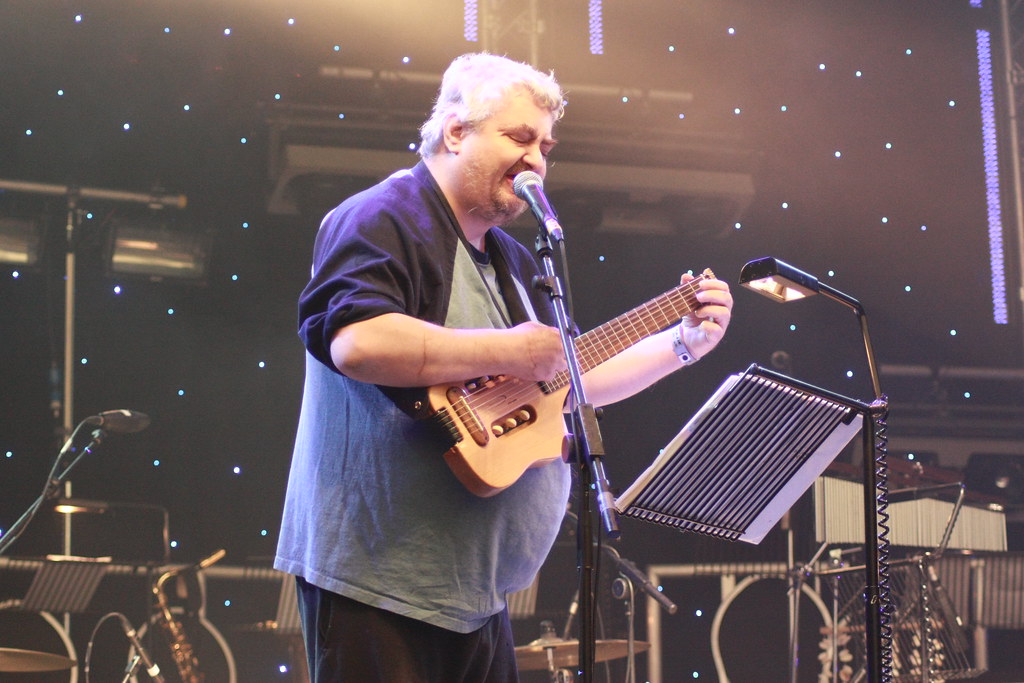 The very definition of a “cult figure”, Daniel Johnston inspires rabid devotion in his admirers and blank incomprehension in his detractors. He seems a strange choice for the Pavillion Stage where he is dwarfed. He reels off the ones you know in his faltering cracked voice and slowly you feel a wave of empathy come across the near silent crowd. At the end of his set, crowd resolutely won over, he announces “I am mentally ill” in a matter of fact way and dedicates the beautiful “True Love Will Find You In The End” to us as â€œa special Christmas giftâ€. As he does this small bubbles appear across the back of the crowd and a tiny Japanese woman in front of us succeeds in catching one in her hair where it remains intact for what seems like an age. I see her again half an hour later and she still has the bubble in her hair. Whilst listening to Daniel Johnston’s voice, the analogy of something fragile thriving in a sympathetic environment is difficult to resist. 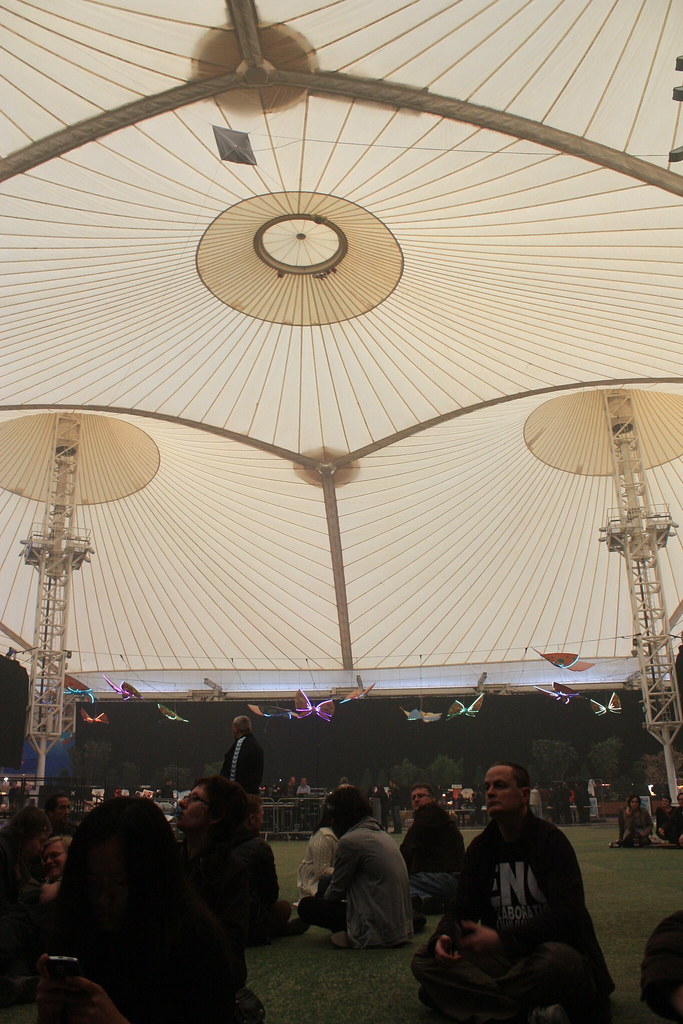 The Butlins Pavillion, as viewed looking back from just in front of the stage

Following Daniel Johnston onto the Pavillion Stage are Spiritualized, apart from Iggy Pop the most familiar name on the weekend’s bill. They are here to add their considerable artistic weight to the disturbing modern trend of “playing the classic album live”.

This trend disturbs me for two reasons. Firstly it adds to the retrograde notion of the “classic”, which is usually an LP that came out ages ago, that a lot of people said was good at the time. It belongs in the same bin of unreconstructed arse as the deluxe re-master, and the five album box set complete with outtakes, which although not deemed worthy of inclusion on the LP, have now taken on a mystical cultural significance which means that everyone wants to listen to the lead singer coughing and the drummer scratching his arse. (Predictably Spiritualized are flogging one of these pointless creations at the merch stall, yours for a paltry Â£125. You could go and see Peter Andre for that.). Music and all its attendant emotion, passion, pain and joy reduced to the level of stamp collecting and the possession of artefacts.

The other reason is that the best thing about a live performance is the build up of anticipation – “will they play my favourite song?”; “will they change the lyrics and slow it down and play it backwards in Welsh?” – and the resultant euphoria that comes with the opening bars. In this case if your favourite song is on 1997’s Ladies and Gentlemen We are Floating in Space then they will play it and you’ve got time to nip to the bar before they do. 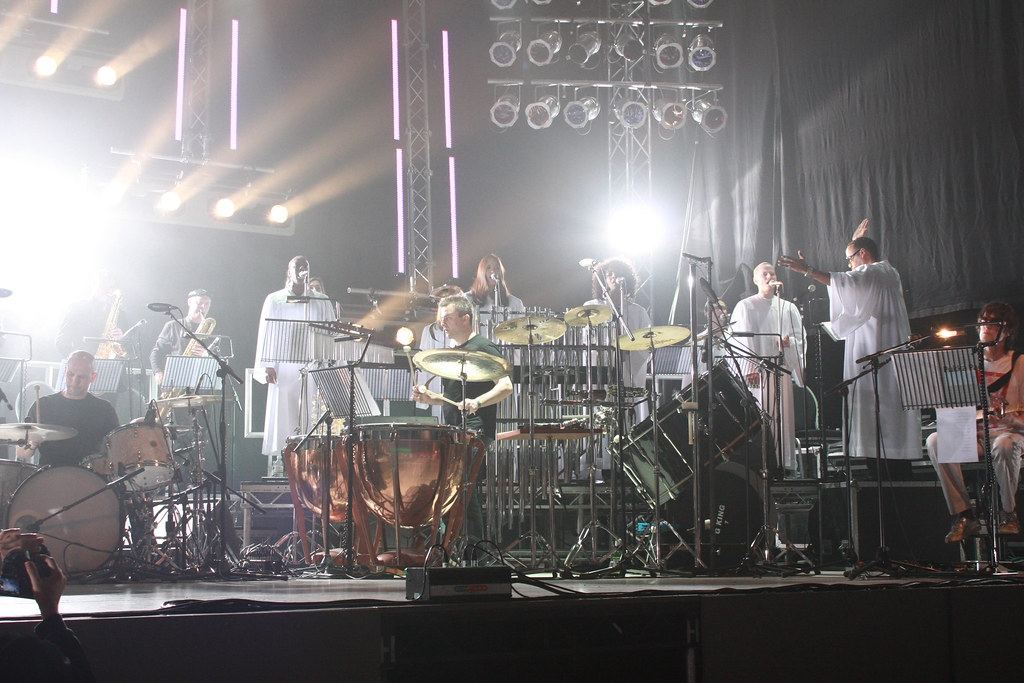 All that grumpiness aside – the Spiritualized live experience is difficult to resist. The stage is packed full of musicians and a full gospel choir [29 performers in all; yes I counted! â€“ Ed] and the whole thing sounds immense, effortlessly filling the huge Pavillion with sound. “It’s big man!, It’s so fuckin’ big!” said Dave the friendly skater dude who I cadged a fag off outside, proving himself to be a much more cogent reviewer than I am.
So it was good – just not as good as if they’d played the hits and then done some massive soul exploding new tune which had, in the words of Dave “blown our fuckin minds, man ” (If you are thinking at this stage of Dennis Hopper in Apocalypse Now – you’re not alone, so was I when I was talking to him).

Albert, whose excellent pictures accompany this piece, would, I suspect, be keen to dissociate himself from the last few paragraphs, feeling as he did, that Spiritualized were one of the highlights of the festival and that I am full of shit. (A popularly held view). [For the record, I donâ€™t think Philâ€™s full of shit, and the difference of opinion between two good friends I think only goes to prove how powerfully personal music can be; Spiritualized brought tears to my eyes at ATP. I shall defend the live performance of an entire album in a separate blog post after this one â€“ Ed]

The night before, Albert even managed to grab a few breathless words with J Spaceman and tell him how ace he thought it was going to be. When he related this story to me I sniffed in my rather supercilious way and accused him of being overly impressed by people in bands who are after all “as good as you are”. This is a long held view of mine which dissolved spectacularly into rank hypocrisy when we bumped into Gina and Ana from The Raincoats at the merch stall, who were lovely, despite my incoherent burblings about how wonderful they were, and signed our LPs.

There are few records that have been more important to me over the last 20 years than the first Raincoats LP and it remains the only LP I own three copies of, having bought a few more as presents for people. It has the nonchalance of post punk, coupled with a rare intensity and downright oddness that has made it grow in my estimation since I bought my first copy because I read an interview with Kurt Cobain and he told me to.

So, with eager anticipation and spewing garbled rhetoric at the lads about how they HAD to see this – I took my place in Reds to see The Raincoats live for the first time. Anticipation grew until the allotted hour arrived and then a little man in glasses came on to the stage and told us that Joanna Newsome was running over on the Centre Stage directly above us and we couldn’t start for 25 minutes. To her eternal credit instead of fuming backstage Gina came out and bantered entertainingly, with the crowd while the representatives of TAWTAG (The Arseholes Who Talk At Gigs) continued to hold one syllable conversations with their mates from 10 feet away.

Eventually, after Gina’s brave but vain attempt to get us to stamp our feet “like they used to do at Rod Stewart concerts” The Raincoats came out onto the stage and did a note perfect “No Side To Fall In” off the aforementioned revered first LP. At this point we realised that the massed members of TAWTAG appeared to be winning their battle with the band. I quietly muttered dark oaths to myself and cursed their first born children for the next couple of songs before I further realised that this was because the band were INCREDIBLY QUIET; so much so that we edged closer and closer to the stage with each song. Finally, with our heads almost in the speakers we managed to blot out the extraneous noise in time for a ripping “You’re a Million” and a joyous “Lola” and I wished that they would have played for longer and that Gina would marry me. 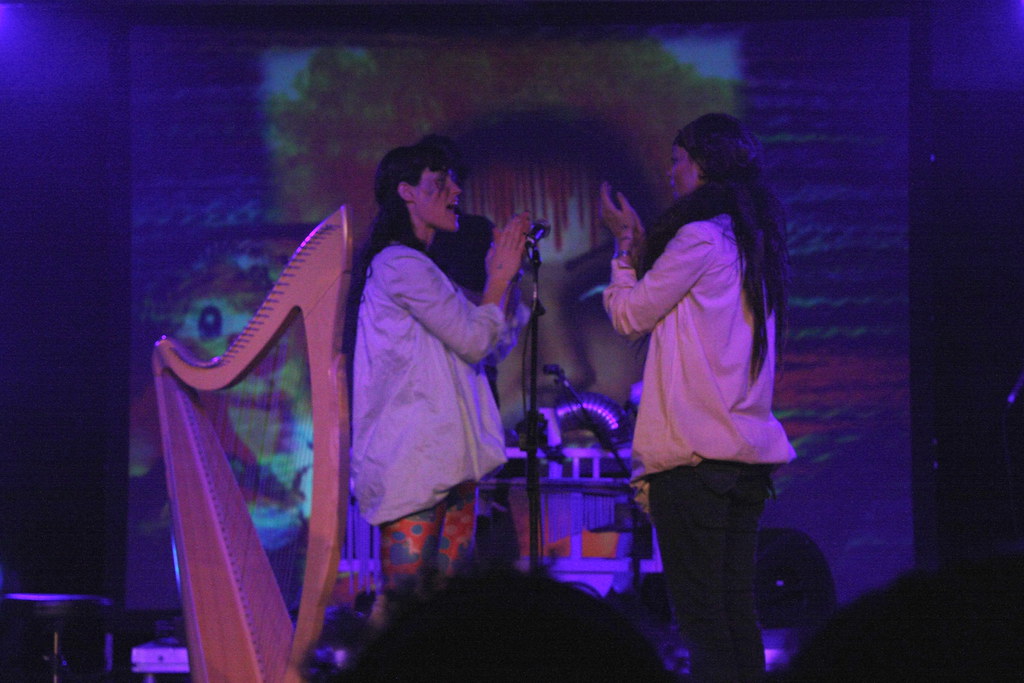 The slightly kookie CocoRosie, the very last band of the weekend

On Monday morning we check out, and having four hours to kill, amble around the sea front and eat falafels, somewhat of an ATP tradition of mine and Albertâ€™s.

When we return to pick up our stuff from left luggage, all trace of ATP has been removed like a noise rock Brigadoon and Butlins is once again thronging with smiling holiday makers and their gleeful offspring. Truly a place fit for Peter Andre.