I hadn’t realised how popular Crystal Castles have become. Â I haven’t got their second album and have missed what I can only assume has been a huge furore surrounding them since the release of their debut in 2009. Â Last night’s gig at Leeds Met was a sell out, and the kids were loving it. Â [I can now legitimately refer to such gig-goers as kids as I believe I am now scientifically old enough to have fathered a child the same age as at least half of last night’s audience. Â This fact is reassuring rather than alarming, as it evidences my belief that I’m still ‘cool’ (although use of that 20th century word may betray me) and have not yet succumbed to the type of ‘safe’ dad music someone of my age might start realising is going to see my happily to my retirement.] 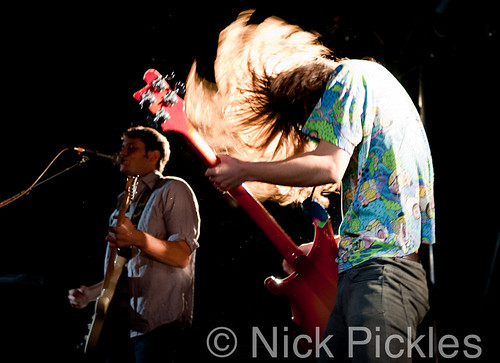 This tour isn’t the first time Crystal Castles and HEALTH have been mentioned by me in the same breath, as I have played previous musical collaborations by them in my show. Â I had thus far failed to see HEALTH and having heard they were marvellous live, I was not disappointed. Â They were quite brilliant and I was left wondering whether Crystal Castles may have made an error by being supported by a band so good. Â The charismatic bass player was centre stage, being as he wasÂ Â the most visually entertaining member of the band. Â I was actually surprised by how organic their line-up was. Â There was a fair amount of synthetic effects, but largely their sound was comprised of guitars, bass, drums, more drums, and vocals. Â Their whole set was an onslaught of confident, articulate, tightly knitted noise, and the highlights were Die Slow and USA Boys.

The between-band downtime, prolonged due to the malfunction of either an XLR or a DI box on stage, wasn’t the usual painful wait, for me at least. Â The soundman had a penchant for Elliott Smith, so I got to hear all of Elliott Smith and half of Either Or during the wait. 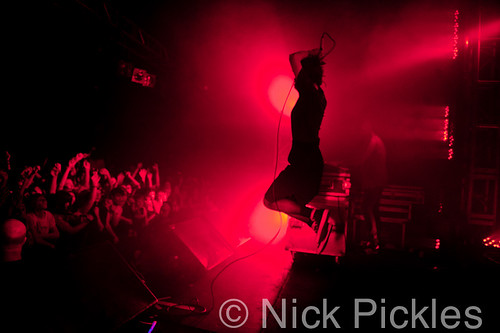 My paternal concerns about whether Crystal Castles may find themselves upstaged by HEALTH proved unnecessary. Â They started with (I assume) a couple of tunes from Crystal Castles (II) and the youth were going crazy, lapping it up. Â The sound was quite immense – deep, full-on electronics, piercing vocals and live drums. Â Couple their aural onslaught with the visual element of the live experience, and it was a performance I really could not find fault with. Â  The heavy use of backlit strobes, against an otherwise mostly dark stage, with Alice Glass’s onstage athleticism, and they are quite a proposition. Â Quite a brilliant night.