On Monday Bradford was treated to a visit by Africa Express, and it was truly amazing. Â  Â What they are doing, touring the country, and stopping off for pop-up performances along the way, is terrific. Â Some of the musicians (I say ‘some’, for there are approximately 80 musicians involved in Africa Express) stopped in Bradford on Monday morning between their London and Middlesbrough dates. 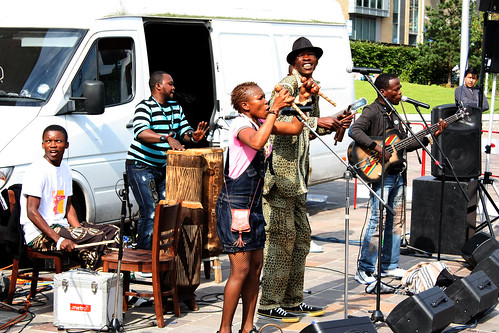 I was lucky enough to be allowed a few hours off work to experience Jupiter & Okwess International in City Park, and to be able to cover it live for BCB. Elsewhere in the city, there were performances at Culture Fusion, the University of Bradford and BRI. Â More about what happened is in this Wild West Yorkshire video:

I am so pleased that Africa Express have done this. Â To be able to give so many people up and down the country chance to see and hear these talented musicians for free, and to give the musicians themselves the chance to visit places they otherwise might not have done, is utterly brilliant. Â Oh, and although he wasn’t performing in Bradford, Amadou Bagayoko was among the party, and what an honour it was to be introduced to him as he reboarded the coach.

In any other week, seeing Midlake and Perfume Genius in Leeds would have been the highlight. Â But, such was the nature of the Africa Express experience, that double gig at the Brudenell Social Club is merely a passing comment before I tell you what I played in tonight’s show. Â As ever, if you wish to listen back to the show, you will find it on here. Â Just look for the 8pm slot. Â This is what I played: