I’ve found of late that I have reached the age where I am simultaneously envious and sneering of young people just entering adulthood.Â  I recognise that this is something of a tragic and predictable state of affairs for someone starting to leave the realms of “young” and hurtling with a winced resignation towards the slapheaded middle age that will be my lot by the time the next Olympics come around.Â  I swear I blinked when I was 19 and suddenly 13 years had passed me by.

Thankfully the what-the-hell-does-he-think-he-looks-like fuddy-duddisms and the you-know-nothing-you-fools grumpy grotty gripes were less in evidence when I took a trip up to Leeds University last week to meet Speech Debelle before she performed her headline gig at the Mine venue of the aforementioned learning establishment’s Student Union.Â  There was, I’ll confess, an overriding sense of jealousy, however.Â  Fresh-faced Freshers with their entire University life ahead of them – a life of late nights, debautched frivolity and loose sexual morals.Â  Even if I wasn’t happily married I just simply wouldn’t have the energy to keep up any more.Â  I guess I’ll have the last laugh when they’re all riddled with the clap. 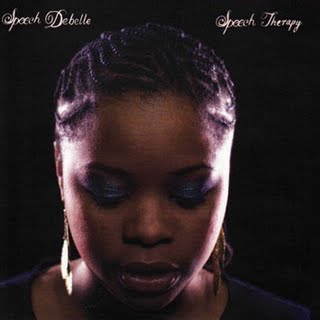 Anyway, this is not supposed to be the forum for me to expose the early mid-life crisis that I didn’t realise I was having until now.Â  We’ll cut to the chase, then, and get onto the heroine of this piece, Speech Debelle.Â  And a chase indeed it was, or sorts.Â  Having arrived at the Leeds Uni SU with only about 90 seconds to spare before my allotted appointment, myself and Mrs Selection Box found ourselves hopelessly lost inside the quite staggeringly complex inner belly of the said undergraduate funhouse.Â  With no mobile phone reception.Â  Balls.Â  After what seemed like an age of stumbling from one corridor to another, through prohibited doors and being forcefully told that “you can’t come through this way” we decided to ignore a “No Entry” barrier through to what appeared to be the venue, and promptly barged in on our prey’s sound check.Â  Oh well, at least I’d not missed my interview, even if I did look like the gormless wazzock I undoubtedly am.

Dissolve, as they say in the movies and music blog postings, to twenty minutes later and we are safely ensconced backstage in the less-than-salubrious green room with a complimentary bottle of mineral water and a very nice lady called Laura, who is Speech Debelle’s tour manager.Â  I have already discovered by this time that people really do call our subject “Speech” as if it is her real name (it isn’t.Â  Obviously), so my first task when she arrives is to work out how I, a total stranger, should address this year’s winner of the Mercury Music Prize.Â  Having established answered in the affirmative to her query as to whether I am “the tall skinny one with the wife”, she tells me – with tongue in cheek – that she would rather like me to refer to her as “Ms Debelle”.

And, tantalisingly, that’s as much as you’re getting for now.Â  If you want more, well then you should have tuned into this week’s show, shouldn’t you.Â  Naturally, being a big-hearted sort, the full interview will be available for you to hear on these pages in due course.

Oh, and in the interim period between the interview and the somewhat under-puntered gig, I realised I’d forgotten to get any photos for the website.Â  I am an arse.

Full listing of this week’s tracks:

3.Â  The Dead Weather – I Cut Like A Buffalo
from: Horehound

5.Â  Joan As Police Woman – Keeper Of The Flame
from: Cover