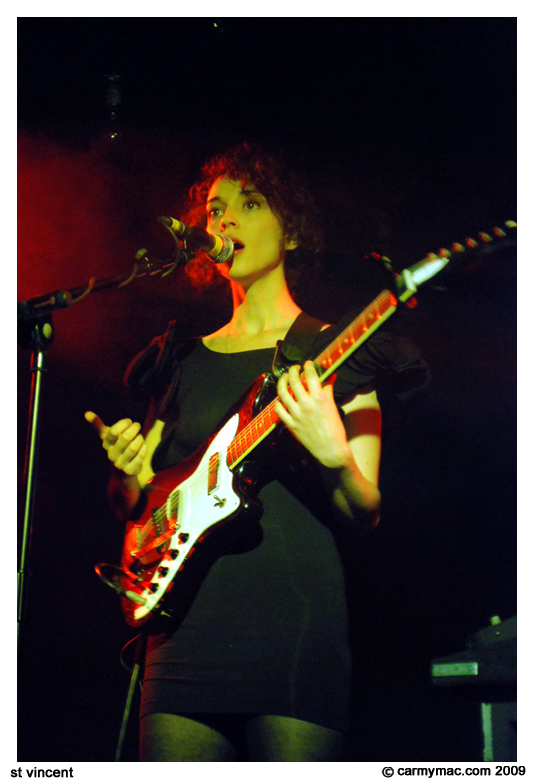 Sam’s first reaction as Grizzly Bear took to the stage was surprise at the lack of beards. Despite the absence of facial hair, and the fact that none of them look old enough to be three albums into their career, they sound mature live and are clearly focussed on the task in hand. There were one or two moments during the gig that verged on self-indulgent noodlings, but overall they’ve developed a really strong canon of songs to draw on. Their vocal harmonies are always spot on, and the heavily reverberated guitars give them a distinct sound of their own. It was also interesting to see Chris Taylor not always playing bass but sometimes clarinets of different sizes. Â There were little nuggets that stuck in my head well into the night, such as the affected backing vocals of Knife and the syncopated harmonies in the middle section to While You Wait For The Others. The only disappointment was that my secret wish didn’t come true – I had hoped Annie Clark would appear from backstage to sing Victoria Legrand’s part in Two Weeks. Even so, the chaps of Grizzly Bear did a sterling job on this song. I thought I might have leave before the end to cycle to the station in time my the last train back to Bradford, but I managed to hear the encore while donning my cycling clobber. And I’m so glad I did, as it was a song I previously hadn’t heard. At the merch stand on the way out I established it was Fix It from their debut album, which I didn’t have. I bought the CD, and pedalled off for my train feeling a thoroughly good night had been had. 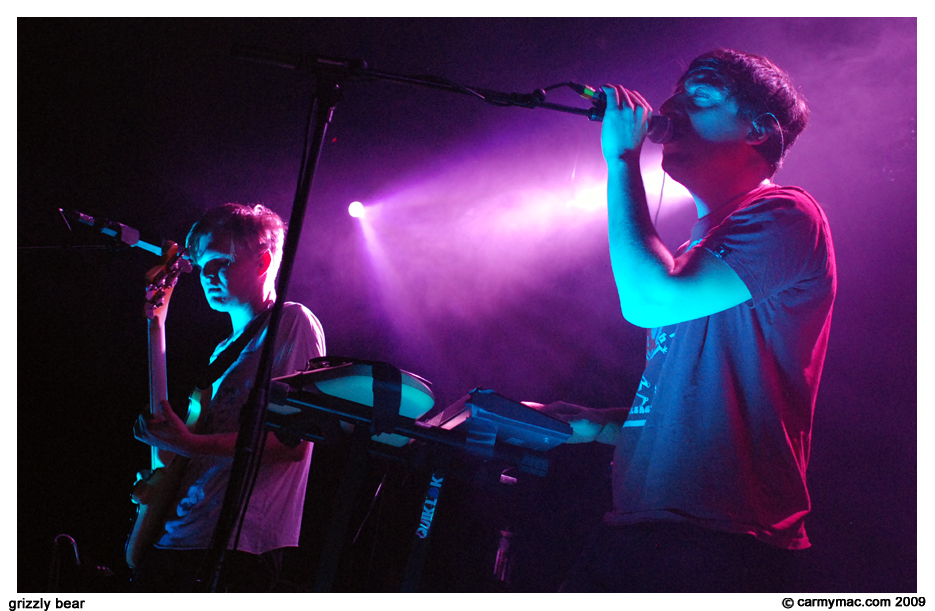 It was a pleasure to see The Wave Pictures again. Having played a gig with them a few years ago with Wilful Missing, and having recorded a session with them at BCB about a year ago, it was nice to have a chat with them. I thought they, as well as Laura Marling, were wise choices of support for Daniel Johnston. Â  I’d not heard anything by Laura Marling Before, but she reminded me of Nina Nastasia, which is no bad thing. Â To top it all though, The Wave Pictures actually got to back Daniel Johnston for the second half of his set. 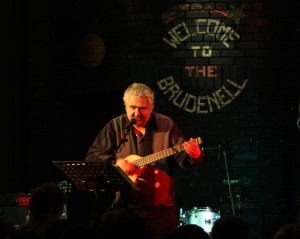 Daniel Johnston at the Brudenel

Daniel Johnston played a few intimate songs alone with his guitar, and then a couple accompanied by a friend on acoustic guitar whose name sadly I didn’t catch. Â This first acoustic set lasted for about 20 minutes, then he took a short break before doing a full set with The Wave Pictures. I have to admit that until recently wasn’t very familiar with Daniel Johnston’s own recordings. I knew a number of his songs through covers by other artists, but it’s only this year, since learning that he was coming to Leeds, that I started to listen to some of his own back catalogue. There is an endearing honesty and openness to his lyrics, and a brittle, vulnerable quality to his stage mannerisms. I don’t really want to go into too much detail about the man and his life. Â Apart from the fact that I don’t know enough about him to speak with any authority, all the things I’ve thought of writing so far would have looked patronising. I will say though, that I was genuinely moved by his performance. His songs seem so much a part of him, and judging from the lyrics, his songs seem so important in him being able to be who he is. One thing that is very obvious, is the man has a genuine talent for writing songs. There were several he did that I’d never heard before, of which the only title I can remember is Life In Vain, with it’s bittersweet melody and moving lyrics, but despite my lack of familiarity all these songs sounded great. 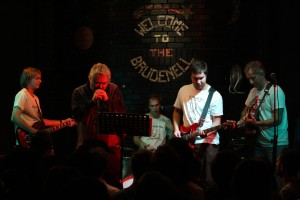 Daniel Johnston and The Wave Pictures at The Brudenel

Daniel out-Beatled St Vincent by performing three Beatles songs. I think it was telling that all three (You’ve Got To Hide Your Love Away, Revolution and Come Together) were John Lennon compositions (I can elaborate if necessary, just leave a comment at the bottom of this blog if you want me to say any more about that). Also, there is an important reason why he sings Beatles songs. It’s not just because he’s a fan, not to please the crowd, and it’s certainly not through lack of original material. One of his own compositions he sang on Friday was Rockâ€™Nâ€™Roll, which tells it all. He sings of how “that rockâ€™nâ€™roll it saved my soul” and how at times when he’s been struggling The Beatles have kept him going:

“You walk around but you gotta have a reason,
Something worth getting up in the morning for,
My heart looked to art and I found The Beatles,
Oh god I was and am a true disciple.”

He also covered Queen’s Crazy Little Thing Called Love, but I can think of no symbolic reason for that I’m afraid! Daniel’s between-song banter was dominated by telling (and telling a second time) his ‘joke’ about a dream he’d had of a man who was sentenced to death for trying to kill himself. He said in the dream he was stood at the back of the courtroom shouting “NOO!” because the man in the dock was him. Again I think if I say too much about this ‘joke’ I am going to risk speaking about something I’m not in a position to comment on, but it struck me as less of a ‘joke’ and more of an ‘insight’ into Daniel Johnston, the man.

Having read that on a previous night of the tour, Daniel’s encore consisted of a shortened version of True Love Will Find You In The End, I felt lucky (even more so that already) as we were treated to the whole song, as an early Christmas wish from Daniel. It almost brought a tear to my eye – partly because the words to that song are so moving, but also because I knew a very special night was coming to an end.

If Grizzly Bear do ever decide they want to grow beards, they could consider asking Jannis of Choir Of Young Believers if he could donate some, as facial hair is not something he lacks. Choir Of Young Believers came to Bradford to record a BCB session before their support slot with fellow Danes Mew in Leeds. They are a very pleasant group, and it was a pleasure to spend an hour in their company. As is often the case with Scandinavians, they are softly spoken (Jannis’s voice sounds at odds with his grizzly look) and their English is of an impressive standard. I just hope that when I mix their session I find I’ve done a good job. The combination of double vocals, electric guitar and cello sounded beautiful at the time. 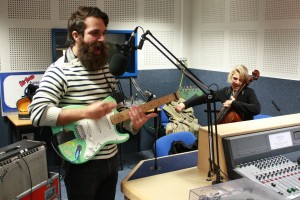 I was a bit gigged-out by the evening, but I wanted to see Choir Of Young Believers’ full live set, and I was pleasantly surprised by how different they are as a full band compared to the stripped down acoustic set-up earlier in the afternoon. They’re building up a good strong batch of songs, and they run a tight ship on stage. I have to admit that I didn’t have the stamina after several late nights to stay for the whole of Mew‘s set, so I was pleased that they did The Zookeeper’s Boy early on, as that was the song I was most keen to hear. Maybe it was because I was tired, but I wasn’t as impressed by Mew as I would have hoped I would be. Their performance was highly polished and professionally executed, and the young audience (younger than either of the previous two nights’ gigs) were loving it, so I’ll give them the benefit of the doubt, and put my lack of enthusiasm down to fatigue.