Also in tonight’s show was a new tune by Christian Fennesz, taken from his marvellous new soundtrack to the film AUN – The Beginning and the End of All Things:
END_OF_DOCUMENT_TOKEN_TO_BE_REPLACED

We had a treaty treat on Wednesday’s show – a session from The Peppermint Lounge. They’re based in Leeds and their music’s really hard to describe but reminds me of The Beta BandÂ &Â Hot Chip – not bad eh! 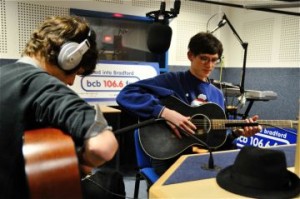 Also Phil Collins’ vox made an appearance – not something I’d usually big up / do but it’s a top remix from a local outfit.

If you missed the programme,Â no worriesÂ – Â it’s repeated on Saturday at 7pm (12th Dec).

Arhh haha, It’s not really Patrick here at all, it’s Adam. But I am posting on behaf of the blue haired chap from the picture on the left (he has gone to France). I am posting up his interview with Neil Hannon best know for The Divine Comedy (and My Lovely Horse).Â TheÂ interview was broardcast onÂ Patrick’s Monday night show, where he spoke mainly on the subject of ‘The Duckworth Lewis Method.Â  If you have notÂ heard the albumÂ you can listen to the whole thing on spotify here (I just listened to the whole thing 3 times over; it’s very good on the ears). Â Anyhow enough of this written primative word;Â  click play to hear the interview…

In the first of what will hopefully become a regular feature, thought I’d give a quick overview of a new album which has

taken my fancy this week.

Kate Walsh’s second album Tim’s House, so named because it was recorded in the eponymous buiding of a friend’s home, became a surprise hit on iTunes in 2007, after the track Talk of the Town was given away free and consumers decided to check out the rest of the album.

The title track – first unveiled to live audiences shortly after the release of Tim’s House – is a bewitching example of powerfully frail heartmeltery, and album opener As He Pleases sours powerfully whilst understanding that true art lies in reiging in the excesses of the emotional.

Listen to the album here: katewalsh.co.uk/audio/

Kate Walsh can be seen on Tour throughout the UK in September & October. See here for dates: katewalsh.co.uk/tour/