Don’t miss the celebrations taking place to mark the 10th birthday of BCB 106.6FM.
It’s ten years since the station got its full-time licence.
And on Bradford Beat we’re marking the anniversary by putting together a programme featuring the best of tracks from every year of the past decade.
Here’s the full track listing for the show, which is on air tonight (Thursday March 1) from 8pmÂ  – 9pm:

Weâ€™ve been putting on a nice spread for a year now, which is why we shared a glass of Babycham with our lovely special guests the Bet Lynch Mob (along with regular guests Jenny Jet and Elias AKA Little Spads). We had a very nice curry afterwards, too.

The thing Em and I probably struggle with most of all making our radio show is doing the maths. We donâ€™t do maths as a rule. So having to work out how much time youâ€™ve got left, and how long your remaining tracks are is quite beyond us, and sometimes results in us introducing a final song only to hear the first 30s seconds of it (which reminds me â€“ Em, we still need to play that Dam Mantle record). Today was slightly different, as we introduced our last track, only to realise we had time to play another. So think of this as a secret track at the end of our mix tape. 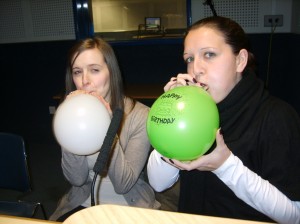 Since Untitled Noise (SUN) started in August 2009, there have been almost 400 blog entries, which I think is a terrific acheivement in just a year.Â  This blog has done wonders for bringing together information about BCB music shows in one place.Â Â Â  Before Untitled Noise (BUN)Â we were a rather dispersed set of islands.Â  But now we have come together as an archipelago I feel we all communicate with each other, and also with you the listeners/readers better.Â  I do still wish thatÂ all BCB music presenters contributed to this blog in the SUN era, because it has the potential to be ever better , but I appreciate that not everybody has time.Â Â  I find it hard enough keeping up with it myself, but I feel it’s really important, so I make the time to do at least one blog a week.

A big thanks to those presenters who do contribute, it’s hard to think how we ever got by in the BUN era.Â Â A huge thanks must go also to Adam Wells who set this blog up for us, and continues to offer his support despite moving to The Big Smoke about 6 months ago.