Tis the season to get your dancing shoes on! So get cracking, cos Team Buffet (minus Boris, who will be laid up in hospital for a while after his accident) are putting on two live spreads… 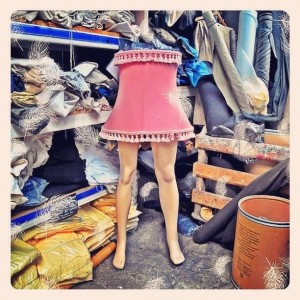 It’s a not for profit event, and, as purveyors of a nice spread, we’re bound to play something you’ll want to dance to. 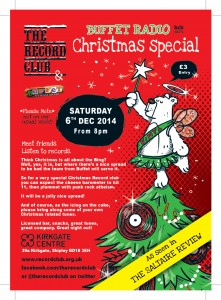 Then on 6th December we’re hosting The Record Club at the Kirkgate Centre in Shipley. The theme is, of course, Christmas and we’ll be playing three full LPs by Andrew Jackson Jihad, Phil Spector and Sufjan Stevens. There’ll also be a little time to play your own Christmas records in between, plus there’s a Pop Quiz (and who doesn’t love a music quiz, eh?). To get you in the mood you can check out the playlist we’ve put together – you’ll notice it’s not typical of the Xmas music that gets pumped into our earholes every time we go shopping. And check out full details of the event on the Record Club website.

One more thing… Boris is reported to be doing well after his accident, and there’s still time to make a small donation to Keswick Mountain Rescue who saved him. This fundraising effort by Ewan Mitchell has exceeded £1000, which is just awesome. Massive snogs to everyone who’s donated!

We hope to see you at the disco and/or Record Club!

If you tuned into Buffet – ta, duck! Or if you’re here to find the podcast, click this link. It’s a new year, and our resolution is to play a Bastardised Beatles record every month (we’ve got a lot to choose from). This month it’s Tijuana style, and it’s a good ‘un. This is what was played, and a mighty fine spread it is:

Have you cracked open the Sufjan Stevens box set yet? Or perhaps you’re more of a die hard Slade fan? Well, which ever way you swing, the supermarkets and bus stations have been churning out Christmas music for weeks now. This means the chart battle for Christmas No.1 has begun (yes, the charts still exist, even though TOTP ended years ago) and the kitsch-fest has kicked off.

This year I’m backing 50 Sniffs – I even paid to download Credit Card Christmas (I’m usually very “bah-humbug!” when it comes to iTunes), as all profits are being used to help clean up the mess left by serious floods in my hometown of Boston last week. If you’ve not discovered 50 Sniffs yet, they serve up a fun, affectionate, occasionally crass Bostonian rap parody. I’ve had “Bought a turkey on finance, then I took it round my Nan’s” as an ear-worm for a week now, and it’s cheesy in all the right places. I don’t think anyone expects it to go top ten, but top 40 would be nice!

And if you want to check out some other weird and wonderful Christmas music, have a nosey at my blog – Bloody Nora’s Big Gob.

The Buffet radio show will be bringing you an eclectic Twisted Christmas 2013 review combo on Sunday 29th December at 7pm. But in the meantime, we’ve uploaded one of our old Christmas shows from 2010, which you can listen to here.

If you tuned in on Sunday – THANKS! If not, but you want to check out some ace music, you can click on the listen again thingy.

This is what we played:

Back in December – cheers!

Hello hello! If you tuned into Buffet on Sept 8th we apologise for being out of step – it was actually August’s show (which didn’t get broadcast because of a computer hoo-ha). However, we still played cool stuff if you fancy a listen…

We’re back on 6th October – bye for now!

Hello there! Thought weâ€™d drop by to let you know about International Fanny Power Day â€“ next Saturday 25th February. 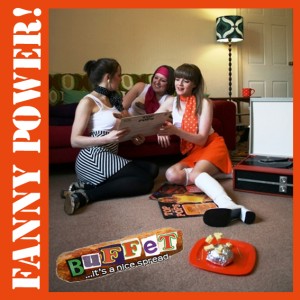 Not only will we at Buffet be dominating the BCB airwaves with lady rock (5-6pm), but weâ€™ll be hosting The Record Club the very same evening in Shipley. Come and join us at the Kirkgate Centre from 7:30pm for lots of vinyl fun. Details are on our Facebook page here: http://www.facebook.com/events/194058260701785/

(You can decide a third album to be played in full â€“ go ahead and vote!).

So, having acquired a tape to CD converter, courtesy of Jenny Jet, I played a fair few tracks from 20+ year old mix tapes made by my friend the late, great, Jas Toomer. You’ll notice the sudden drop in volume and sound quality, which of course only adds to the nostalgia!

We also dedicated our show in part to the 400,000+ people who marched for an alternative to public spending cuts. We were there – here’s a kazoo solo, from Emma Bob III!

And this is what we played:
END_OF_DOCUMENT_TOKEN_TO_BE_REPLACED

On episode 20 of Buffet, Jenny Jet asked the question “Coldplay – why?”. We don’t like them, they are very beige. But we did play some music we like very very much, including a snapshot from a re-issue of Spunkle’s 2003 soundscape Music for DXing (on First Fold records). Here’s a video link: http://www.youtube.com/firstfoldmusic#p/u/3/Tt1PdFDmgAs

And here’s a complete list of what we played, which you can, of course, hear on BCB’s new listen again feature:

Do you know, we were so busy chatting away behind the scenes on our radio show that we forgot to name-check Those Dancing Days and Caribou, which is very rubbish of us. And Those Dancing Days deserve special mention as they lead the Wichita girl-pop revolution, a revolution that should be acknowledged. Germaine Greer made a point of saying there still arenâ€™t many women in bands, when I went to see her in Halifax last week. I know what youâ€™re saying, Germaine, I really do, but there are actually LOADS of fannytastic musicians out there – we have no trouble finding stuff to play on Radio Buffet. Anyroad, before I tell you what we did play on our radio show, let me share with you something Ms Greer did teach me that I never knew before. Itâ€™s a new term of endearment for ladyparts â€“ Bearded Clams! Kept me amused for days that didâ€¦

Hereâ€™s what me, EmmaBob3 and Elias played â€“ hope you enjoyed it: