Buffetâ€™s New Year Review wasnâ€™t much of a revue as there were less of us contributing to the show than weâ€™d anticipated. This was due to seasonal poorliness. So we shall resolve to get more guests on the show during 2011!

In 2010 we saw lots of ace bands, listened to great music, but people died and we donâ€™t like the emerging political landscape, so on the whole we gave it the finger. We also played some records:

Big thanks to everyone whoâ€™s contributed or listened to the show in 2010, itâ€™s been real!

Time is against me now…
Here’s the video to the new Grinderman single. Lorna Eastwood played this on BCB last night, and Mark Hearne has played it twice on BCB today, that’s how much we like it!

And here’s what I played in my show tonight:

END_OF_DOCUMENT_TOKEN_TO_BE_REPLACED 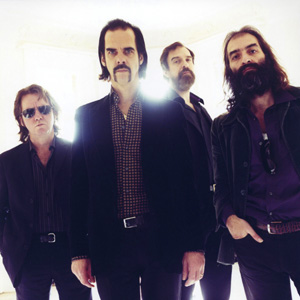 END_OF_DOCUMENT_TOKEN_TO_BE_REPLACED

This week sees the release of the second Grinderman album, smartly titled Grinderman 2.Â  To celebrate, in my show tonight I spoke to Jim Sclavunos from the band.Â  If you heard the show you will have heard Jim and I discussing the evolution of Grinderman since the first album, and also the video to the single Heathen Child, which you can see below.Â  If you thenÂ read the rest of this entry, you will be able to listen toÂ a longer version of the interview, which is available as a podcast.Â

END_OF_DOCUMENT_TOKEN_TO_BE_REPLACED

It’s been quite a couple of days for me, recording first a Grinderman interview to be broadcast in Eclectic Mainline next week, and then recording a session with Mountain Man for The BCB Sessions.Â  Not sure when that one will be broadcast, but definitely a Wednesday in the next few weeks.Â  If you’re on Facebook, the BCB Wednesday Night Club is the place to find out what is happening on a Wednesday.Â  Back to the present, here’s what featured in my show tonight:

Well, last week you might have heard Phil Cope play a tune by the simply marvellously-named Duran Duran Duran in his show. By some strange twist of fate, this week I’ve userped Mr Cope by playing a tune with the lyric “Duran Duran Duran Duran” in it (it was the new single by The Vaselines in case you missed it). Anyone would think it was all part of a grand plan, but I assure you listeners, Laura is not, as far as I know, preparing 5 Durans for her show next week.

Here’s the next in the installments of Grinderman teasers. I showed you the first last week.

And here’s a list of what I played in tonight’s show:

END_OF_DOCUMENT_TOKEN_TO_BE_REPLACED

What I want to know is…are Grinderman going to dance like an R ‘n’ B girl group when they play in Leeds on 27th September..? They have a new album on the way, don’t you know…

This is what I played tonight: