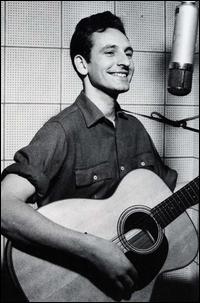 I have a theory which, like most of my theories, probably doesn’t stand up to close inspection, that those of us born in the early seventies were the first generation whose parents had cool record collections. My early years, like many of my contemporaries, were soundtracked by Elvis, Jerry Lee, Eddie, Gene, Fats, Chuck and countless twangy guitar expositions from the likes of Link Wray and Duane Eddy.

Because of this, I retain a dedicated affection for the music of the late fifties to this day, but there was always one name that baffled me.

My dad and his mates would speak in hushed and reverent tones about the first time they heard Lonnie Donegan. Added to this, when I later began to nurture a youthful obsession with the music of the 1960’s, I read that my fave raves (Beatles, Stones, Animals and so on) were all inspired to take their first tentative steps into the world of music by this diminutive Glasgow Irish Cockney with the curiously whiny voice.

I mean, I liked “Rock Island Line” but what kind of hunched,self loathing carapace of humanity doesn’t like that? END_OF_DOCUMENT_TOKEN_TO_BE_REPLACED

This week’s programme featued the world’s most criminally underated band, Cleethorpes’ Orphan Boy, new stuff from Skream, Autechre, Laura Cantrell and Luciano, TWO (count ’em) Bo Diddley cover versions, the latest solid sender from Canada’s Telephone Explosion records and the sweariest record in all the kingdom from Liverpool’s potty mouthed popstrels Town Bike. All this and an exclusive poem from Bradford’s own Little Brother That, my friends, is entertainment.

The above mentioned were one of the top showbiz turns that featured on the programme this week and their record (which incidentally takes longer to say than it does to actually play) was a thrilling 33 seconds comprising of 10 seconds of an Brazilian game show host singing Mary Hopkin’s “Those Were The Days” followed by a man ( I think it was a man) going URRRRGHHHHH in a bowel shakingly deep voice. I’m tipping it for next year’s Eurovison.

…of course you do.

Of course I’m one thirteenth Spanish on my uncle’s side, you know ….

Proof of this rather contentious statement can be found on the reverse of his 1989 LP “New York” which bears the following (probabaly misquoted) text. “This LP should be listened to as a whole as you would a play or a film”. Berk.

On a lighter note jazz ensemble Putting On The Ritz (crap name , good band) have re recorded the Velvet Underground’s sophomore LP “White Light, White Heat” in a free jazz style and the title track featured on this week’s programme along with …

END_OF_DOCUMENT_TOKEN_TO_BE_REPLACED

No time to make joke this week. Am man, Must watch other men kick ball in net.

Hello cheeky. Having given my all standing in for Laura on the BCB Sessions this week, I dragged my exhausted and broken body back in to the studio at midnight for this week’s programme. What do you mean “you could tell?”

Laura was off this week sipping sparkling elderflower cordial in the swanky nitespots of that London, which meant I got to rummage around in the BCB Sessions archive and play some of my favourite sessions plus some top tunes, and it went like this.

After weeks of specials, guests, featured LP’s and other exciting showbiz frippery, this week we returned to the business of playing some tunes and damn fine they were an’all.

Starting with an oldie, one of the great records and also including the Lazer Zeppelin LP , a record, which when my inevitable mental collapse happens and I am apprehended by members of the constabulary on the central reservation of the M62, naked, saucer eyed, and howling like a dog , I will be clutching close to my chest.