If you bumped in to British radio stalwart Andy Kershaw and asked him about Half Man Half Biscuit, he’d tell you that they are “our greatest folk band”

While this is probably a reference to the way in which Nigel Blackwell’s lyrics concern themselves with the minutiae of everyday life, the thought of a 24th Century version of Cecil Sharp House staffed with legions of reverent, bearded men in tweed jackets, brows furrowed in concentration, trying to divine the historical significance of lines like “There’s a man with a mullet going mad with a mallet in Millets” (from “National Shite Day “) or “Neil Morrisey’s a nobhead” (from “Bottleneck at Capel Curig”) is a warming one. 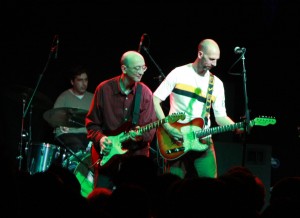 The chief attraction for me in going to see HMHB live was to see what the notoriously publicity shunning Nigel Blackwell actually looked like – the answer, as evidenced by the photos which accompany this piece, is disturbingly like The Edge. Kicking off with a rollicking “The Light at The End of the Tunnel (is the Light of an Oncoming Train)”, the Biscuit gave us a generous run down of their career , each song accompanied by an audience that knew every word. It’s not every gig where an opening line such as “I fancy I’ll open a stationers“(from “24 hour Garage People” ) gets a rapturous cheer from the floor.

As is typical for a HMHB gig, the between song banter with the audience was as entertaining as the songs , as Nigel’s approval for the back catalogue of the Spinners (Liverpool , not Detroit), the return of Ronnie Moore to Rotherham United, and Bauhaus front man Pete Murphy were all discussed. The parlous state of his beloved Tranmere Rovers went unmentioned, but that’s probably just as well. 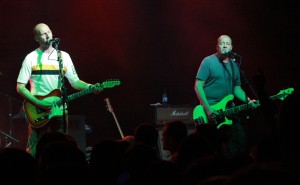 No new songs sadly , but Geoff from Probe Plus assured us there’s a new LP next year and there are certainly no shortage of targets for Nigel’s ire (a song laying into the execrable Danni Minogue being a personal fantasy of mine), but what they prove tonight is that wit is a much better weapon than rage with which to combat the aching tedium felt by most sane people in the face of a world seemingly obsessed with dimmer switches, Primark FM and Peter Andre.

A resounding away win.