Also in tonight’s show was a new tune by Christian Fennesz, taken from his marvellous new soundtrack to the film AUN – The Beginning and the End of All Things:
END_OF_DOCUMENT_TOKEN_TO_BE_REPLACED

How do you fancy catching Cloud Control live in Leeds on Tuesday 4th October? Well, we’re giving away a pair of tickets to see them rock the Brudenell Social Club (Leeds). All you’ve gotta do is answer this daytime TV-esque oh so simple question:

Every what has a silver lining?

Is it a) duvet

You never know, it could be you! 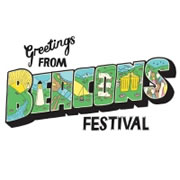 Tonight I ran a competition to win a pair of tickets to the Beacons Festival.Â  The competition will remain open until noon on Friday, to give people who listen again chance to enter.Â  If you do listen again, and hear the question, please either Tweet your answers to @bcbradio, email studio [at] bcbradio [dot] co [dot] uk, or put your answer on the BCB Facebook page .

The line-up for Beacons is amazing.Â  The best line-up of any festival I’ve seen this year.

Back to tonight’s show, here’s a preview of the new Offshore EP, a tune from which I played tonight:

Here’s an exciting opportunity for any musician wanting a video, or video-maker wanting a musical act to work with.

The South Yorkshire Filmmakers Network (SYFN) are running their 5th annual 2Weeks 2Make It competition.Â  Here’s a ‘making of’ video from 2010.

There is a small fee to enter as a musician (certainly much smaller than the amount you would need to spend to get a good video made) and it is free to enter for film makers.Â  To find out more about it and how to enter in 2011 visit the SYFN website.Â  The closing date is 2nd May and the launch event is on 5th May.

This evening we gave away a pair of tickets to see M.I.A. in Leeds on Saturday. From this clip from Jools Holland the winner is in for a top night!

Here’s what I played in the show:
END_OF_DOCUMENT_TOKEN_TO_BE_REPLACED

My messages are like buses…you wait ages and then loads come at once. But the joy when you get one is oh so good!

Great news, we’re giving away a pair of tickets to see The Duke & the King and Wilful Missing! They’re playing tomorrow night (Thursday 28th) at the Wardrobe in Leeds (right next to the bus station). It’ll be fantastic! I saw them play at the Hi Fi – it was packed and brilliant. So if you want to go for free (courtesy of the Hee Haw Sessions & BCB radio) then tune in tonight to Eclectic Mainline from 8pm. The winner will be announced before 10pm on The BCB Sessions. That’s 106.6fm if you’re in Bradford or www.bcbradio.co.uk to listen online.

Back in June I told you about a remix competition for These New Puritans‘ Hologram. Â I suggested I might have a go myself, and indeed I did! Â I would be the first to admit that mine is not a fully realised idea. Â Given more time (to get more familiar with Logic, as well as exploring my idea for the remix) I think my mix has potential to sound much better. Â Another thing to note (and again this is to do with me not being too familiar with Logic yet) is that mine is relatively quiet – so turn up the volume when you listen to mine!

Anyway, I entered my effort into the competition. Â You can hear it below along with the original and also my favourite of the other competition entries, that by Mute Branches.

(remember, it’s quiet so turn up!)

Now then, this looks exciting! Might have a go myself if I get time! The info below is copied from the Domino press release…

To coincide with the release of the astonishing â€˜Hologramâ€™ on July 26, TNP have set up an exclusive remix competition hosted by www.fairtilizer.com.

Head to http://blog.fairtilizer.com/contest/puritans-2/ and you will be able to download the parts to Hologram for free. Remixes of the track can then be uploaded and entered into the competition â€“ as judged by the band.

The winner will receive tickets to Londons 1234 festival, where These New Puritans are performing, along with special prize pack which includes music, merchandise and signed special edition goodies. The winner will also receive a pro-account for Fairtilizer.

END_OF_DOCUMENT_TOKEN_TO_BE_REPLACED

Here’s what I played on Wednesday’s show (3rd March):

We had a special acoustic session fromÂ Lawrence Arabia, recorded here at BCB by Albert Freeman (thanks Alb).

And if you’re reading this before 7th March – take a punt on our competition…it could be YOU!

Answers to: studio@bcbradio.co.uk with Beach House competition in the subject line.

So this week for the first show we have an Ivyrise special!

Ben and Dan from the band popped in for a chat and played a couple of tracks.

We also have a competition running to win 2 separate pairs of tickets for the gig next Thursday 18th February at the Cockpit, Leeds.

Listen in to the show for the question and send all answers to james.long@bcbradio.co.uk. Two winners will be selected at random and announced on the Ivyrise Facebook page after the show.

Check out www.Ivyrise.com for band information and links to their Myspace and other pages.