Back in June 2011 we had Paul and Steve Morricone from The Scaramanga Six on our show, where they exclusively revealed they’d be recording their next album in Chicago with Steve Albini. Well that album, Phantom Head, was unveiled last month so we got them back in the studio for a chat, live session and lots of Albini themed record spinning. 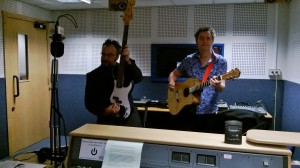 Steve & Paul from The Scaramanga Six live at BCB

Here’s what we played!

And check out the new album from The Scaramanga Six here!

See you next month!

Now then! We chucked in a few film-themed tunes this month to tie in with Bradford International Film Festival (you may have spotted a few BCB DJs at BIFF By Night, too). If you want to hear the show you can listen againÂ here

And this is what we played!

We played old stuff, new stuff and record store day stuff. And we giggled – a lot.

Theme from 321 (courtesy of a Spunkle mix)
Blood Red Shoes – It’s Getting Boring by the Sea
The Scaramanga Six – Autopsy of the MindÂ http://thescaramangasix.bandcamp.com/album/autopsy-of-the-mind

We are back on May 21st, and you can of course listen to this show on BCB’s aces “Listen Again” feature – go to April 23rd “g”.