So, the new Flying Lotus album is out. Â Jumbo Records sold out of the deluxe vinyl edition before I managed to get one. Â I had mixed emotions as a result. Â I was both disappointed (for me) but pleased (for FlyLo and Jumbo). Â Clap along with this:

Shonen Knife are currently on a tour of the UK and Ireland. Â Have a look at their live dates and see if there is still time for you to catch them.

Another tune from this week’s show with a video worth feasting your eyes on is that by The Helio Sequence:

If you want to listen back to the show, be my guest. Â This is what I played: END_OF_DOCUMENT_TOKEN_TO_BE_REPLACED

Rather tattered, tired and hassled today, so apologies if I was somewhat stuttery in my show.Â  Here’s a rather fine video for one of tonight’s tunes:

And here is a list of the tunes I played in my show:
END_OF_DOCUMENT_TOKEN_TO_BE_REPLACED 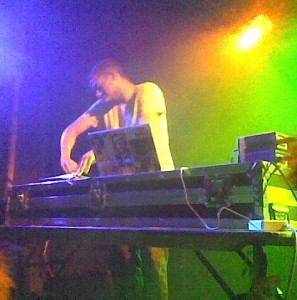 Now in 2009, while some of the neighbouring blocks of flats have been gutted with a view to renovation, the bulk of Park Hill estate is mostly unpopulated, and boarded up, with just one wing still being occupied by tenants.Â  This wing, and three unpopulated wings, form a horseshoe with a grassy embankment sloping down into the curve.Â  This accidental amphitheatre was chosen by Warp Records for a cinematic event as part of the label’s 20th anniversary celebrations. END_OF_DOCUMENT_TOKEN_TO_BE_REPLACED