It occurs to me that I’ve not really had a proper look around the whole site, so I rectify this.Â  There’s not a great deal around other than food stands and stalls selling t-shirts with wanky slogans, although I do spot a place which sells ale as opposed to the rather flimsy Tuborg which is the only other beer available onsite.Â  Sadly, further investigation later in the day reveals the ale to be rather horrid as well. END_OF_DOCUMENT_TOKEN_TO_BE_REPLACED

END_OF_DOCUMENT_TOKEN_TO_BE_REPLACED

Sina Makossa – a lovely live version with the Soukous Stars

END_OF_DOCUMENT_TOKEN_TO_BE_REPLACED

Info below from a press release about an interesting event in September, that’s all from me for this blog, now over to them..

Digital distribution has changed the structure of the music business and had a significant impact on record labels, retailers and distributors. These challenges for the music industry also present opportunities for new music businesses and DIY artists. This panel will discuss the range of services available from digital retail to streaming services and how too generate revenue from your music.

END_OF_DOCUMENT_TOKEN_TO_BE_REPLACED 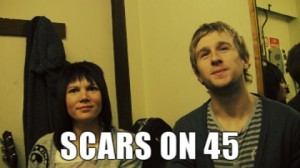 A couple of months ago I had a chat with half-Bradford, half-Leeds bred indie rockers Scars On 45 before they went off to Texas to play SXSW with their new Chop Shop Records label-mates Fanfarlo and Marina and the Diamonds. Vocalists Danny Bemrose and Aimee Driver had a lot to say about their upcoming album, living the dream and… where to get a good curry in Bradford.

“People always get it wrong… they go to places like Aagrah and Akbar’s and nice places, but you’ve got to go to some proper dives to get a good curry. There’s Sweet Centre… there’s Karachi. Karachi was in The Guardian, it’s been going since 1965! And it’s either chicken and spinach, or chicken and potato… but it’s got to be masala.”

And his bandmate? “Spicy Cottage! Chicken tikka every time!”

Check out thejustaminuteproject.com for the video interview and myspace.com/scarson45 for some tunes.

Hummm, the title of this blog Untitled Noise seems more applicable to this post than any other thus far.

Last night I was was lucky enough to sit through a talk on the history of sonic art delivered by David Rogerson from Sound and Music. It was mostÂ enlighteningÂ for someone such as myself who mainly works with visuals (apartÂ from working on the radio). Appreciating modern music you see how the avant garde work of the past has worked its way into mainstream punk and modern electro. I won’t write at length about it but if you’re interested take a look at some stuff from the Noise scene, Microtonal Music and artists such as John Oswarld, Harry Patch and People Like Us.

END_OF_DOCUMENT_TOKEN_TO_BE_REPLACED

The problem with writing on a blog is that your own personal opinions and convictions take hold; you start to believe your word is the law. Just give me a soap box, it’s already happened with the following article. So I must stress these are just my personal thoughts and musings, and that does mean they’re correct; it’s just you might hear other peoples ‘incorrect’ accounts elsewhere.

So I want to talk first about the two female solo acts of the day – Little boots and the much talked about Florence And Th Machine -Â and explain why one works and one…humm does not (that’s them opinions I was talking about).

Little boots was first, weith the her very “in trend” electo sounds and delivery. The crowd seemed pleased but the whole act felt a little muted; forced perhaps. Like the the decision was to take the trendy sound of the day and reverse engineer the act to fit. From the clothing to the quirky hand held synth played through out the act. Towards the end of the set “Victoria Christina Hesketh” pulled her brother on who proceded to perform some Bev style tambourine act because it was his birthday. To top even this odd event Boots pulled on the whole darn family, friends and there WAGs it seems for the last song, to stand giggling like children at the prospect of being on stage; while I stood scratching my head at the fact they were on stage at all. I don’t think the rest of the crowd seemed to mind, but quite frankly I did. Boots should go back and finish was she started with the wonderful dead disco, but alas this will not happen

END_OF_DOCUMENT_TOKEN_TO_BE_REPLACED 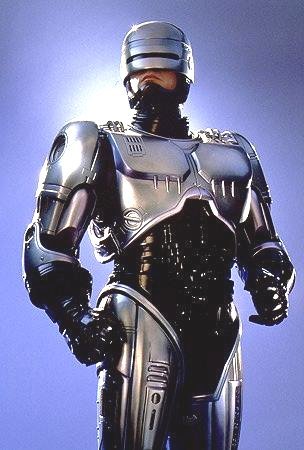 OK onto the actual music. END_OF_DOCUMENT_TOKEN_TO_BE_REPLACED

Well, due to some thieving swine at the Leeds Festival, Adam Wells no longer has an iPhone from which to upload Audio Boos and other multimedia.Â  This is absolutely rotten, as Adam had worked so hard setting up this blog in time for the festival, and has gone to the festival full of enthusiasm for getting top quality content.Â  All this has been done asÂ  a keen volunteer, so it absolutely stinks that his weekend has been tainted like this.

So we have been busy busy busy. Weekend Vibe grabbed a few mins with Fightstar earlier. If everything is working OK 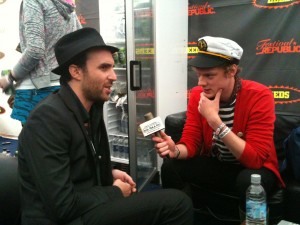 there should be a little audio boo of this on the right of this post. The lads seemed a lovable rouge style characters (bless Charlie from Busted, we will never forget). I also conducted a interview with Jimmy from Metric (in the band and also does all the production) from Metric, (no audio boo from this, sorry, but you can look at this wonderful photo, and don’t people say a photo is worth a thousand words right?) You can also catch up with our full interview on the Festival round-up show on BCB next week. Metric played a blinding set with front woman Emily clearly following my lead by wearing sailor attire. Their set was very like being hit in the head by synth style icicles in a very exciting way. 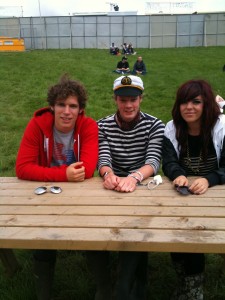 Weekend vibe also took the lead and interviewed Soft Toy Emergency (I went to the loo). I have just gotten back from their set and I must say they are really one to watch. Undoubtedly the most exciting act I have stumbled across thus far. What do they sound like? Hmmm, think Foals, add a punky edge and you’re somewhere close.
The performance was stella – not just the front woman putting on a show but the whole band joining in the excitement of there sound. The crowd were also clearly very impressed with everyone joinning in with the ‘hotter nanny’. At one point they called to the crowd, “Is any one from Liverpool?” A massive cheer erupted. I glanced around nervously and checked for my wallet. Oh and I found 50 pence on the floor.
Gonna find White Lies now.